Chic admits that he doesn’t have blossom blood, but that’s because Hal isn’t his father. FP maybe? We do know Alice has a serpent past. Speaking of Hal, he interviews Hermione Lodge on her plans as mayor. Andy Cohen is her celebrity endorser? Some people aren’t on the Lodge’s side, though. Jughead is going on a hunger strike, Ethel milkshakes Veronica and Fred’s construction company severed ties with the Lodges. Reggie’s comments even lead Veronica to punch him K.O. 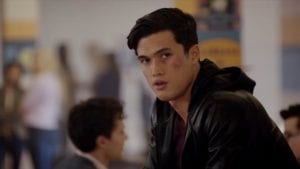 Naturally, Veronica’s parents won’t listen to her and tell her to lay low. Instead, she runs for student body president. Toni tries out for the Vixens and wows the crowd. Cheryl offers to hold a sleepover to celebrate Toni. At the party, Cheryl admits to the girls that she’s scared of her mother and uncle Claudius. The girls are reluctant to believe her but do when they hear a crash. Cheryl’s Nana had fallen down the stairs. She’s ok, but Cheryl is visibly shaken.

Jughead feels like his childhood is being torn down and convinces the serpents to chain themselves to Southside high in protest.  During Veronica’s campaign concert, Ethel passes out a flyer outing Veronica. Betty, completely distraught, drops out of the campaign. Veronica feels alone and feels like she needs a shield because no one can trust her. She knew everything and now so does everyone else. 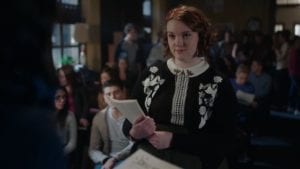 Chic found out about the catfishing plot by talking to Kevin. This prompts Betty to release her darkness and scare the wits out of him. Alice was pissed, but more so at the fact that Bughead is physical. Alice confronts Betty about how “alluring the Jones men are,” but assures her that FP is not Chic’s dad.

Hiram tells Archie to remove the serpents by force. Archie counters the request by asking Hiram to release his father from his contract. Archie obeys and breaks up the protest and his friendship with Jughead. Jughead decides to run for student body president and asks Betty to be his VP. All Betty asks in return is to stay with him. Fred decides he’s going to run for mayor again.

Archie, I love you but you are a little delusional. Hiram may have good ideas but his execution is poor. Listen to your mother! Who, by the way, I was glad to see in this episode. I am also disappointed in Veronica. I thought that she felt she was doing the right thing. Now she just seems wishy-washy on her stance. Does she feel forced to side with her parents or is she willingly going along with it despite what she told Betty? I am afraid for Cheryl too, her mother is crazy. Boarding school in Switzerland? Really Penelope? Toni will find out the truth. See you next week for more drama!