Last chapter we saw that the head of the Pickens statue was found and that Hiram Lodge asked Tall Boy to steal it. We also saw a dead body in the Cooper kitchen and Bughead reunite! 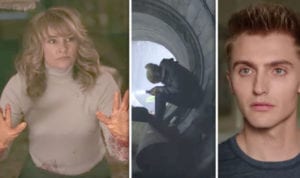 So, about that dead body, the guy apparently tried to hurt Alice and Chic killed him. Alice and Betty determined to help Chic, clean up and dispose of the body in a sewer pipe.

Hal has been staying with Penelope Blossom and thinks his family is hiding something.

Betty and Alice return home and scrub every single inch of the house in case that guy touched anything.

The next morning, Alice and Chic act like nothing happened. Betty, however, is visibly shaken. She jumps when Jughead knocks on the door. He had called her the night before to tell her he loved her and Betty didn’t say it back. She was kind of busy with the body.

Kevin announces that a body was found, slashed in a hotel room. Betty gets herself so worked up that she rushes to the bathroom to vomit. The body was Hiram’s friend, Papa Poutine. 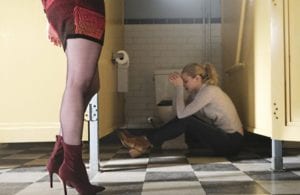 Hiram says that Papa Poutine had many enemies and he assures Veronica that he had nothing to do with the death. Archie relays the information back to Agent Adams. He doesn’t believe him and threatens t0 make things difficult for the Andrews family.

Betty visits the dumping ground when the body’s phone rings. She takes the phone home to find more out about the guy. She confronts Chic about the dead guy saying he contacted the guy that night. 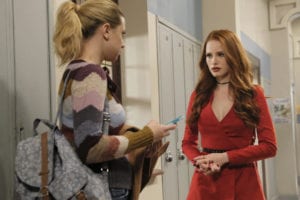 Cheryl tells Hal to get out of their house before she tells Alice and Betty what he’s up to. Cheryl tells Betty anyway.

Betty breaks down and tells Jughead what happened. He tells her she can still call the police. Seeing the dead guy’s car on the road, they hotwire it and throw it in the lake.

Alice and Betty seek FP’s help with there situation. He vows to not let them go down like he did so he buries the body for them.

Archie ends up telling Hiram about the FBI agent. Andre picks up Archie to go see “the boss.” The boss is Hermione Lodge. Agent Adams isn’t real, it was all a test.

Chic is still a mystery. I was hoping to find more out about him by now, but we still know almost nothing. Why did that guy have to die? Will they get away with it? Also, what the hell, Hermione? Why would you test someone like that? This episode left me with more questions than answers, I guess that’s the theme of the show. I can’t wait for next week!

‘Riverdale’ Recap Chapter 25: The Wicked and the Divine”

‘Riverdale’: Bravo’s Andy Cohen to Guest Star as Himself