Chapter 24 revealed a lot of secrets: Hiram and Archie’s dislike of each other, Chic’s line of work and how General Pickens murdered a bunch of innocent people.

Archie is now interning for Hiram Lodge, and while running errands for him, Archie gets a visit from Agent Adams. He hasn’t heard from Archie in a while and was getting concerned.

Veronica is getting ready for her Confirmation and her whole family is coming in for the event. Mayor McCoy and Josie are even attending after their apology.

Impressed with Archie’s altercation with Nick St. Clair, Hiram invites Archie to his poker night, to help out, not play. Veronica is not happy.

Sheriff Keller has been going around asking the Serpents if they know who beheaded General Picken’s statue. The visits soon turn into eviction notices.

FP needs to find out who is responsible for the statue so he can save their homes. Jughead goes to Mayor McCoyand says the Serpents are innocent, but it didn’t do much good. 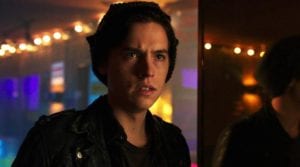 Jughead needs Betty’s help. She suggests they find the statue’s head, that way Mayor McCoy won’t have a leg to stand on.

Penny Peabody has found her way back and is willing to help the Serpents provided that Jughead is kicked out and she gets to remove his tattoo. An eye for an eye, right?

“You will be the death of us. Not the North Side, not Penny, you.”- FP to Jughead.

At the poker night, Archie is doing his best to keep the men happy and to gather information. Hiram’s friends aren’t thrilled with Pop’s Diner and they start spilling secrets. They plan to get rid of Hiram after the confirmation and if they’re anything like mobsters (which I’m sure they are), that is not good for Hiram. 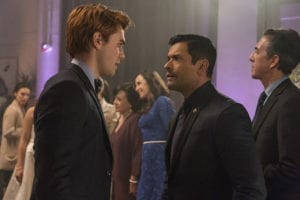 Veronica tries to tell Archie about her family but he refuses to hear it. He loves her and doesn’t care if her father is a mobster. He tells Hiram what he heard and conveniently Papa Poutine was found dead in his apartment. (Hm, I wonder who made that happen.)

Jughead tells Betty what he did and admits that he’s scared. Betty gets a call that the head has been found. When speaking with the man who found it, Jughead gets a feeling that Tall Boy is behind it, their relationship has always been rocky.

FP and Jughead interrogate Tall Boy. He says Hiram asked him to do it and that way he could get rid of Jughead and eventually FP. The plan backfires and Tall Boy is stripped of his jacket.

Jughead apologizes to Betty and needless to say Bughead is back! #Bugheadforever

Betty eventually goes home to find her mother cleaning up the blood of some guy.

The Lodge’s bought Southside High? Okay, why? What is Hiram planning to do in Riverdale and why did he hire Tall Boy to behead a statue? Hiram has been around all season but he is still a mystery. Another mystery is who was the dead guy at Betty’s house and who killed him? One mystery ends and two more appear.

Also, go Juggie! He stopped Penny from coming back, got justice for the Serpents and got the girl. This episode was a win for Jughead.

‘Riverdale’: Bravo’s Andy Cohen to Guest Star as Himself

Home » Uncategorized » ‘Riverdale’ Recap Chapter 25: The Wicked and the Divine”