Riverdale is getting musical, again! They are keeping with their murderous teen theme and this time they will perform Heathers: The Musical.

The musical is based on the 1989 film starring Winona Ryder and Christian Slater about three girls named Heather who were the bitchiest girls in all of Ohio until newcomer Veronica and her boyfriend decide to give the Heathers what they deserve.

“Last year, we had a blast doing Carrie. This year, we wanted to honor another iconic teen movie. Heathers: The Musical is big fun, with great roles for the Riverdale kids,” executive producer Roberto Aguirre-Sacasa said. “And everyone is singing…”

Everyone? Yes, even Jughead Jones! 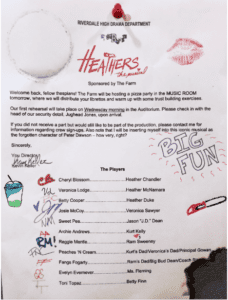 Wait, Archie Andrews will be back in time for the musical? So, he survived the bear attack? That’s wonderful, I knew it!

Home » Music » ‘Riverdale’ is taking on ‘Heathers: The Musical’