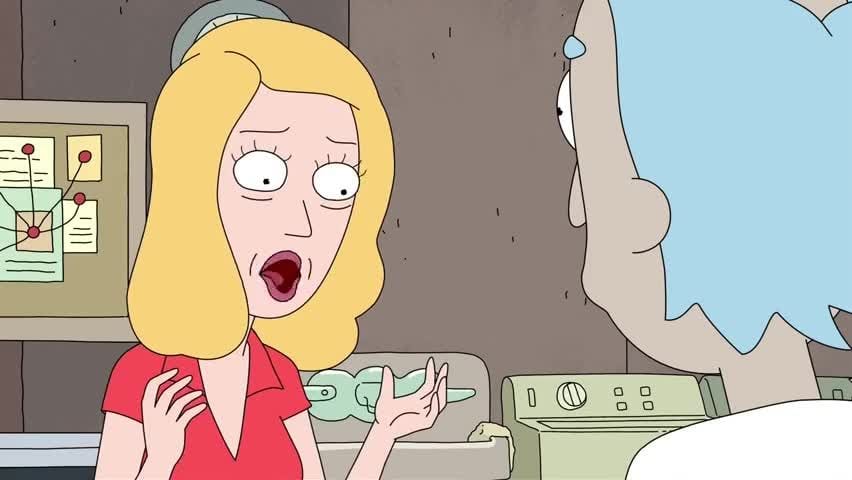 “Dad, feel like I’ve spent my life pretending that you’re a great guy and trying to be like you, and the ugly truth has always been…(“that I’m not that great a guy and you’re exactly like me”)…Am I evil?”

Over the last three seasons what have we really known about Beth Smith? We know that she has severe abandonment issues when it concerns her father. Even to the point where she’ll ignore the problems with her children and her marriage to make Rick happy in fear that he’ll flee again. We also know that she got pregnant as a teenager and became a horse surgeon, something she clearly resents on both counts. And she drinks… a lot. Outside of that? Yeah, nothing else really. I would never have considered Beth to be one-dimensional, even the one-dimensional characters on Rick and Morty aren’t one-dimensional, but as far as her backstory went everything was kind of surface level. We only saw what the show told us as there was never a really deep dive into who Beth Smith is. Until now that is.

“The ABC’s of Beth” was as much an exploration on parenting as it was an exploration of who Beth is, and the results were dark (#seasonthree). My biggest take away from this episode is the sadness of it all. There are some great moments between Rick and Beth here, mostly after she goes on a killing spree of adorable creatures made from incest…yes that was a thing, but the moments they share are real. Rick has never been good with emotions and when he asks Beth to help clone Timmy it feels like a genuine father/daughter moment. Something we haven’t seen since the end of “Pickle Rick” where the two agreed to go get drinks together. The problem is despite how much Beth wants Rick to be the father she’s imagined, they both know that he’s not. Not even close and Rick will be the first one to admit that.

Rick’s approach to parenting on the surface level seems sort of mean, and a lot of Rick’s actions can be perceived this way, but in some ways, it also seems kind of protective. Hear me out for a minute. Rick noticed early on that Beth was a problem child. Like seriously troubled. Did you see all her toy requests? That pink knife? The ray gun? The teddy bear with all the right organs? Clearly, this kid had some issues and Rick recognized this which is why he created the imaginary planet, Froopyland. Yes, Rick masks the creation of this planet with venom, to protect the neighborhood from the monster that was child Beth, but I think it was made to help prevent her from turning into Rick. Something that now seems bitterly inevitable. By leaving Beth during her formative years, Rick doesn’t prevent Beth from becoming just like him, he expedites it. 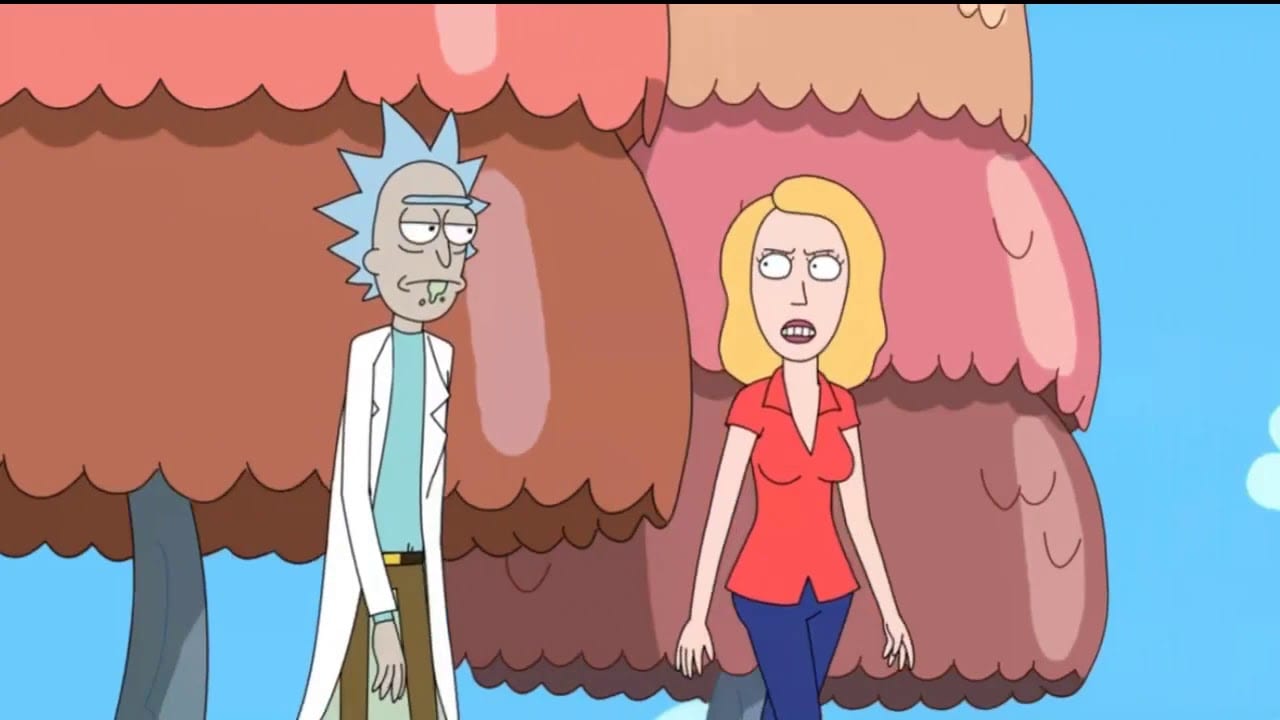 Now we have a woman who wants to love this idea of a father but is now understanding that her father isn’t much to aspire to. In fact, this woman who has lied to herself for years about the greatness of her father is now realizing that she’s just like him. I would argue that parts of Beth are proud to be like Rick, incest creature killing for sure was reminiscent of Pickle Rick vs the Rats, but the Beth that sees the bigger picture understands that that’s not a good way to be. That’s why Rick’s offer at the episode’s end becomes more unnerving. He recognizes that Beth understands that he’s not a good parent and she’s just like him, and now she’s stuck in this rut where she doesn’t know who she is. Jerry is gone. The kids seem to exist without her. The drinking. The horse surgeries. Beth doesn’t have an identity and Rick does the most fatherly thing he can do at the moment. He offers his daughter a chance to find herself… by acting like him.

Rick offers Beth the chance to leave and live a life that she’s never had before. Free to explore the universe and find that identity that’s been lacking. Rick tells Beth that he’ll make a clone of her with all her memories and love for the Bachelor intact so the children will never know that she left and she can come back whenever she wants and he’ll get rid of the clone or she can stay gone forever. No one will know the difference and the choice is totally hers. Rick offers Beth the abandonment route. Rick left, and eventually came back, and now he’s offering a daughter who is afraid she’s turning into him to do the very thing that he did. It’s a moment filled with conflicting emotions as Beth considers the offer while looking at pictures of the family and Rick just wants her to choose a life for once. To make it hers. Maybe it’s his attempt at calling her bluff in the hopes that she’ll recognize that she’ll be no better than him if she leaves or perhaps he really doesn’t care about her decision just that she’s finally decided who she wants to be. The choice is a more adult version of Froopyland.

The show doesn’t tell us what Beth chooses and leaves it up to us to decide. The last shot of the episode is Rick, Morty, Summer, and Beth sharing a family dinner together while Rick and Beth exchange I love yous. Something feels off with Beth though, and I want to believe that she stayed but I couldn’t help but think she took the offer. I can’t put my finger on it but it just felt like Beth was gone and none of us were the wiser. I want to believe that Beth acts a little differently because the burden of choosing has been removed, and that seems like a happy ending, but… I just can’t. That alone makes me sad.

I went to Twitter after the episode and asked you guys what you thought and 85% of you also believed that Beth took the offer, and again my sadness was affirmed. I wasn’t the only one who viewed Beth as someone who would leave. I hope we find out at some point that she decided to stay but the show’s real answer is in how we perceive the character. 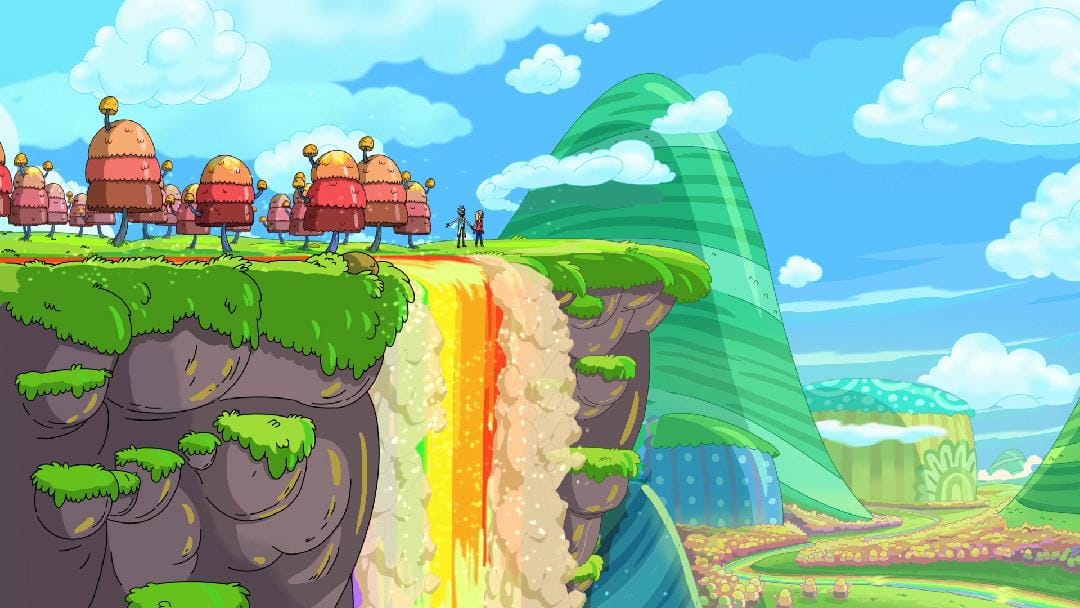 Some other quick thoughts before I leave you-

There you have it Geeklings, only one episode of Rick and Morty left before season three concludes. What did you guys think of “The ABC’s of Beth”? Has Rick spent his life trying to prevent Beth from becoming like him? Does Beth take his offer to explore the universe? Sound off in the comments below and as always if you’d like to talk more Rick and Morty with me you can find me on Twitter @iamgeek32. In the meantime, I’ll see everyone here next Monday to review the finale. Stay strong and have binge parties. I’ll be here for you if you need me.