Spoilers ahead for Wonder Woman #25

I will talk about how amazing it is to see Diana as the kind, loving, compassionate hero that doesn’t need to throw a punch every day of the week. But being kind and forgiving does not mean you cannot ever be angry, and seeing that acknowledged is just as meaningful. Although Diana walked away from her confrontation with Ares and his sons with the answers she needed, now that she has them she is not quite sure what to do with them. She has lost Barbara Ann again, Etta doesn’t seem to want to speak to her, and she even had to give up her lasso—an ironic cost for finding out the truth. 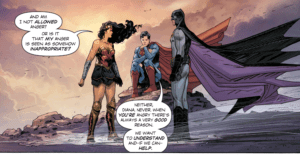 But she doesn’t need the lasso to find the truth, or hope, which Clark and Bruce remind her. I loved the callback to an amazing annual story where the three first met, and it gave this moment that much more weight.

When Diana finally confronts her patrons about how they deceived her, they are quick to point out that they actually gave her everything she ever wanted. Of course, they still deceived her. As she rightfully says, she deserved better. Personally, I did not expect her to forgive the gods right away. Although upon reading it again, it could easily be interpreted that she didn’t. In fact, she doesn’t really say much at all. At first, I thought that this scene resolved everything too easily, but easy is not always bad.

The way the panels unfold as she receives the (new?) lasso was simple, but also incredibly beautiful. They also contained my favorite bit of dialogue from this issue, which sums up the past year of Wonder Woman quite well: “The truth of you has never changed, Diana. Even the gods themselves could not take that from you.” No amount of adversity can ever change who Wonder Woman is at her core.

As another of Rebirth’s extra-sized anniversary issues, Wonder Woman #25 does a lot to wrap up the dangling plot threads of the past year, while leaving plenty for the future. This is also Greg Rucka’s last Wonder Woman, and I cannot express just how much I will miss him on this book. All year he has shown how much he loves and respects Diana’s character. Not just Diana’s, but Steve, Etta and Barbara Ann Minerva, too. It has been a remarkable ride, and the new team will have a tough act to follow, but I will be right there with them.

Also, beards are nice, but I vote that Steve Trevor remains clean shaven…. And I’m not just saying that because a bearded Steve looks too much like Oliver Queen, but that is certainly a reason.