Spoilers ahead for Wonder Woman #23.

I’ve not been covering Wonder Woman, but with the film coming out next weekend, and this being the conclusion of an arc, I thought now would be a good time to start. While I haven’t written about this series, I have been reading it since the start and enjoy it immensely. It is one of the Rebirth books that is on a two-week schedule, but is unique in that the past nine issues have alternated between two arcs: “Godwatch” and “The Truth”. Wonder Woman #23 serves as a conclusion to “The Truth,” as Veronica Cale and Diana finally arrive at Ares’ prison to rescue Cale’s captive daughter.

Throughout both arcs we have been shown the lengths Cale will go to save her daughter, including manipulating Barbara Ann into becoming the Cheetah (twice), getting one of her best friends killed, and trying to murder Diana. While she has been trying to find Themyscira, Diana had all but given up on ever seeing her home again. In the end, neither comes away with exactly what they want….

The most interesting character in this issue is Rucka’s 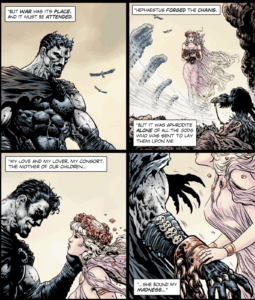 depiction of Ares. He has shown up before, just after Diana left Themyscira—or at least that was what readers were lead to believe at the time. It turns out he has been locked away for ages, and it has been the purpose of the Amazons to keep him locked up. That isn’t an uncommon backstory for Diana’s people. However, what makes this version of Ares different is the power that keeps him imprisoned.

The God of War isn’t held captive by chains or force, but by love. It only makes sense, doesn’t it? It fits so perfectly with Rucka’s portrayal of Diana. While Wonder Woman can and will fight, her commitment to love and truth are how she can sustain peace. It gives her the strength to face down gods. And ending where Diana doesn’t fight may feel anticlimactic, but I can’t think of a better way for “The Truth” to end. Diana finally learns the true purpose of the Amazons, and the whereabouts of her mother and friends; Cale’s daughter is made whole again, and for a moment the two are reunited.

It’s also a bittersweet ending, since both Diana and Veronica are not given everything they were after. Although Izzy is freed from Ares’ prison, she can’t return home with her mother. Likewise, Diana can see her mother at a distance, but can’t step foot in Themyscira. While the conclusion of “Godwatch” in two weeks may change how things have been left here, I doubt it. Sometimes there have to be sacrifices, and no way to get around them. 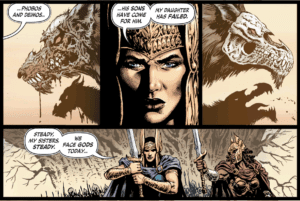 Both Greg Rucka and Liam Sharp will be leaving Wonder Woman soon. Sharp has worked primarily on the present-day arcs since Rebirth began, and has done a magnificent job. I especially love his depictions of Ares’ monstrous sons, Phobos and Demos. He and Rucka will both be missed when their last issue is released in June.