Spoilers ahead for The Flash #27.

I almost felt bad for Eobard Thawne. Almost. It was very weird and it made me uncomfortable. The issue itself was great, and I enjoyed watching Flash and Reverse Flash beat each other up throughout different time periods, but Thawne really managed to get under my skin. Like Barry says, the Reverse Flash brought Barry and Iris to the future to teach them something about Barry, but this entire arc has revealed much more about Eobard Thawne than anyone else. He’s psychotic, dangerous, and incredibly powerful, but also kind of sad and pathetic. 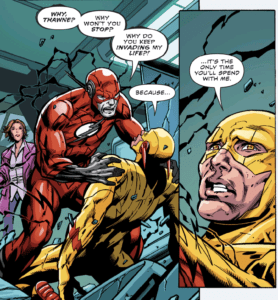 This entire arc has been a strange back and forth with the Reverse Flash’s conflicted feelings over someone he once admired. There is no way to ever excuse the horrors Thawne has inflicted on Barry Allen and the world, but it’s clear that was never Williamson’s intention. Instead, he manages to make sense of Eobard’s actions in a heart-wrenching confession. He doesn’t torment Barry because he hates him, not really. He does it because he wants to spend time with his hero. That’s… so weird, but at the same time, I understand it. That’s why this issue made me so uncomfortable in the best way.

Even though Reverse Flash made his Rebirth debut during “The Button” crossover, this arc serves as his real introduction to Rebirth readers.

One thing that felt strange to me was how Thawne “died” this time around. If any readers of this issue also watched the latest season of CW’s The Flash television show, it is a very familiar conclusion: Iris pulls the trigger. I would have been okay with that if it had not immediately been swept aside as the two return to the present. I also did not quite understand whether or not Barry was actually corrupted by the speed force or if he was just faking it—my assumption is the latter, but perhaps that explanation is being saved for the next issue.

Another panel that pulled at my heartstrings harder than I expected was the inevitable break-up between Iris and Barry. We all knew it was coming, but I had forgotten the most important secret Barry was keeping from the love of his life: the fact that she has another nephew. That is one reunion I am desperate to see one of these days. 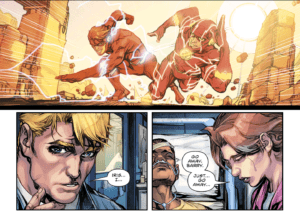 It was interesting to have the Flash shown to us through the eyes of his most psychotic fan. It’s the old cliché of “never meet your heroes”, taken to the extreme. Barry Allen is a beacon of hope, but underneath the mask he’s kind of a mess. And now he’s back to rock bottom, so I can only imagine where he goes from here. My first guess is, with he and Iris on the outs, Barry’s due for a visit from Black Hole and Meena Dhawan.

*Images taken from DC’s The Flash #27