Thawne certainly likes to complicate things, but he also helps to keep the Rebirth mystery interesting. It appears he remembers everything from Flash’s history, no matter how many reboots or new timelines come about. But he doesn’t seem to know anything about the New 52 continuity or Rebirth. He insists that Kid Flash is “new”, implying that this Wally West would have never existed without Flashpoint (and not just in the meta sense). It does have me a little concerned that Wally’s existence might be in jeopardy… 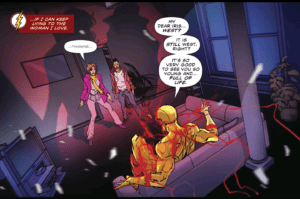 I hope not. And I hope that Thawne’s actions in this arc don’t lead the Rebirth continuity down too dark a path. So far, Rebirth has been about hope, but lately the three Flashes have been facing some major obstacle. Thawne is just the latest in a long line, and may turn out to be the worst. His fanatical obsession with both Barry and Iris still has me curious how we’ll end up with the future shown in Flash #23: where the world knows the Reverse Flash as the Flash’s closest friend.

I love that we get another glimpse into the 25th Century at the start of the issue, with what I assume is the same narrator from the last issue—a museum guide, perhaps? The faceless speaker tells the reader that the Speed Force is a blessing, but that it comes with a cost. We are shown two tubes of Speed Force energy, one yellow and one black. Is Williamson implying that the Reverse Flash exists because there must always be an opposite Flash to keep the Speed Force in balance? He uses the word “negative”, not “reverse” which is clearly a deliberate choice. So, what does it all mean?

I always end up with so many questions at the end of a Flash issue. I had several throughout the entire “Button” arc and the list just kept growing. It’s what keeps me coming back! But this arc has more than just some intriguing mysteries, it also has fabulous visuals. 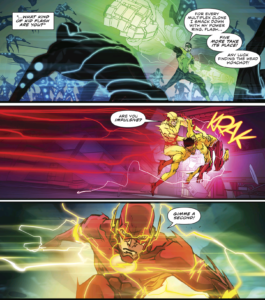 The art continues to stand out in this issue. I love the sketchy lines and vibrant colors. But one thing that struck me in this issue, is I think The Flash #24 would make a compelling read even if the dialogue was removed. The expressions and framing of the action conveys the tone and emotion of the story perfectly on their own. That’s the sign of a great collaboration between a team, from the script down to the editing, and it makes for a great issue.

*Images taken from The Flash #24