Spoilers ahead for The Flash #23.

I was curious what affect Thawne’s death in “The Button” would have on Flash going forward.

I was not expecting this: 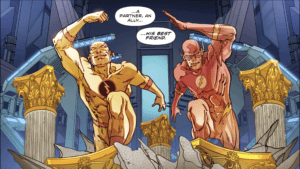 When reading the first page of The Flash #23, I actually had to stop to say, “Wait, what!?” Eobard Thawne being remembered as Barry Allen’s friend? In what universe!? Unfortunately, we don’t get any answers to that question just yet. But we do get another team up as Flash goes from Batman to Green Lantern. Before commenting more on the plot of the issue, I just want to applaud Ivan Plascencia for his color. Both Barry and Hal have powers that involve a lot of light and color, and Plascencia perfectly renders the light of Hal’s ring and the lightning of Barry’s speed. Even Multiplex, the “villain of the week”, wears a suit with blue Tron-esque lines. The fight between the three men becomes a beautiful light show. 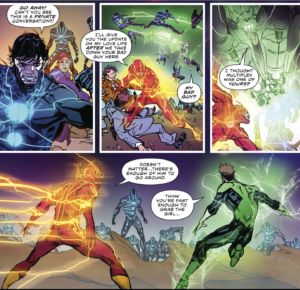 This issue also reveals that yes, “The Button” has changed Barry Allen. Paranoid that Thawne will return, he seems to be considering the possibility of killing his enemies. It is never explicitly stated, but I believe the meaning is clear. Will the twist at the end of this issue lead Barry down a dark path—perhaps to a story-line resembling “The Trial of Barry Allen”? I’m not going to write off any ideas without giving them a chance, but I would personally prefer not taking Flash down this road.

It is also becoming clear that Barry and Wally won’t be able to keep the Flash’s secret identity from Iris for much longer. She already knows that her nephew is Kid Flash, but is still in the dark about her long-forgotten nephew (red-haired, Titan Wally) and her boyfriend’s superhero proclivities. I’m all for having Iris know the truth, and for their relationship to continue moving forward. It’s easy to miss if you’re not looking at every case, but the speedsuit for Meena Dhawan was encased in the future Flash Museum… just to remind readers that the Flash’s love life might be getting a bit more complicated with or without secret identities.

As I said, the fight with Multiplex is well done and gorgeous, and offers a look into the dangerous thoughts running through Barry’s mind, but I was so distracted by the opening scene and the questions it raised. Thawne is Barry’s ultimate enemy. Is history altered during this arc, or is the world of the 25th Century simply being deceived by the Reverse Flash’s machinations? It’s a mystery that immediately hooked me, I just hope it’s not leading me into a trap.

*Images taken from DC’s The Flash #23