“The man in black fled across the desert, and the gunslinger followed.”

Words that will never be forgotten in this Constant Reader’s mind, because they pulled me into another world full of magic, mystery, loyalty, love, hate, and revenge. Those words picked me up and carried me along on a journey with a group of individuals that have since become family; my ka-tet. 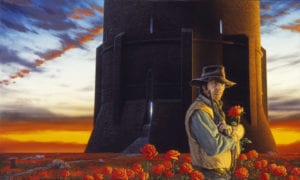 I first met Roland Deschain of Mid-World somewhere around 1997 while working a closing shift at a local convenience store. In the past 20 years, I have traveled down the path of the beam with this old world Gunslinger and his Ka-tet more times than I can count. Learning this movie was finally on the horizon brought such excitement and anticipation at the idea of finally getting to see these beloved characters come to life on the big screen.

Let’s get one thing straight – this film is NOT supposed to be 8 books condensed into one movie. This version of The Dark Tower, as I understand it, is supposed to set the premise and introduce you to some of the main characters from King’s saga: Roland Deschain of Gilead, Jake Chambers of New York, the man in black Walter, and the tower itself. It was meant to give the audience an introduction to this world, so when the subsequent films and television series play out, the entire story will eventually get to be told.

There were major differences between the first novel and the film. Elements from several of the later books were included in the movie, taking the story in a very different direction than many who knew the story was expecting. This adaptation wasn’t anything close to the first book of the series, The Gunslinger, but presented a new beginning to the story. In an article on Nerdist, King himself was quoted as saying, “…purists may not like it. I can’t tell about that for sure…”

The reviews have not been favorable, with many of these hardcore fans chiming in with great disappointment over a myriad of things from the short runtime to the lack of depth and passion from the script. Some of the biggest fans of the series that I know were highly disappointed in the jumbled story and felt that the writers showed a lack of regard for who these characters were at their core.

A while back, I decided to go into seeing The Dark Tower with a very open mind. It took a while to push aside all my presumptions, hopes, and fears, and just decide to watch the movie as objectively as possible; despite my deep love for the series of books. I think that’s what saved the film for me. Knowing from the get-go that it wouldn’t be a faithful adaptation and throwing away years of expectations, I enjoyed what played out before me. It wasn’t by any means a perfect film. Even though I thought they pulled off telling the first part of this new Dark Tower story, it could’ve benefited from a longer runtime. I think this would have allowed for the characters, especially Roland and Jake, to offer up more reason to want to follow their journey.

The Dark Tower wasn’t the film I was hoping it would be, but it was something new presented within a universe that I already felt at home in. Personally, I am ok with an altered version of a story, as long as it is still entertaining and has a familiarity with the original material. For me, this movie accomplished that.

Regardless if you have been a life long fan or are new to the story, if you are on the fence about seeing it, do so with an open mind and open heart. I plan on going again, if for no other reason than to catch the nods to many other novels from Sai King. Sorry, can’t tell you what they are, guess you’ll just have to go see the film and find out for yourself.

Overall, and without comparing to the novels, I’d grade The Dark Tower a C+. There was vast room for improvement, but I don’t think it deserves the harsh reviews that the critics are turning in. It wasn’t my dream cast, but I think Idris Elba, Matthew McConaughey, and Tom Taylor did a good job of introducing you to their respective characters. The fight scenes were well constructed to show off Roland’s legendary prowess with his guns. Most importantly (to me anyway), those legendary words were included. Some might say that it felt like an afterthought, but I just appreciated the fact that they were there.

If you want to watch a fun film set in a new universe with endless possibilities, grab a ticket and get some popcorn and sugar.

Home » Featured » Review: ‘The Dark Tower’ Has a Polarizing Premiere Among Critics & Fans