This review contains major spoilers for this issue. Proceed with caution!

Chelli Aphra is a great character for the Star Wars universe. She fills a role that no other leading character does. She’s not a hero, or a good person on any scale, but she’s also not a maniacal villain bent on galactic conquest. She is a supporter of the Empire, but her solo series has shown that even she has her limits. She cheats, steals, tortures and kills, but also never comes across as inherently evil. Where Star Wars typically revels in redeeming its villains and bringing messages of hope, Aphra makes no apologies for who she is. And really, who would want her to?

This is important to remember going into Doctor Aphra #6, the conclusion to the Ordu Aspectu arc that saw Aphra teaming up with her righteously devout father. Aphra Senior has spent his time trying to convince his daughter to reform. There were several moments throughout the story that could make you think Aphra was progressing towards being a better person. While she does display her character growth at the end of this issue—making some peace with her father and their past, while also choosing to spare Captain Tolvan—it’s important to not automatically equate development with redemption. Aphra is still the protagonist of this story, but that doesn’t mean she’s ever going to be heroic. 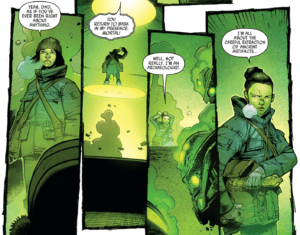 What I appreciated most about the plot of this issue is it finally gave Aphra substantial time without her supporting cast of Triple Zero, Bee Tee and Black Krrsantan. But the rest was just an overly familiar adventure. The young archaeologist and her father flee the collapsing temple, pursued by supernatural obstacles and a team of soldiers bent on capturing them. They make the usual sacrifice: giving up all the knowledge the temple might hold to ensure their own survival. We’ve seen it before, only this time: it’s in space!

With a character that stands out the way Aphra does, it’s kind of disappointing to see her first solo story arc end with such a familiar climax.

Really, the strength of Doctor Aphra #6 is in its presentation. The art team of Kev Walker and Marc Deering use their panels to really convey the emotion of the moment. When the issue opens, each panel is arranged in a haphazard way—intersecting and folding over one another in confusion and fear—as Aphra and her father learn the truth behind the Ordu Aspectu. When Aphra later causes the temple to self-destruct (because of course she does), she also causes the panels to crumble and break apart. Finally, when the frantic action has passed, everything slowly deescalates and settles into a more typical comic arrangement. 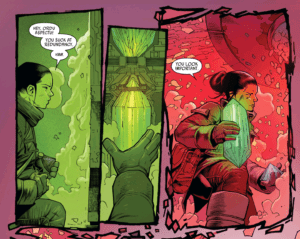 Because Doctor Aphra uses an exaggerated art style, setting itself apart from the main Marvel Star Wars more realistic and proportioned look, it gives Antonio Fabela the opportunity to go big with his color palette. His use of over-dramatic lighting also helps sell the emotion and urgency. Whole pages are painted in bright greens or harsh reds as the issue rolls on from one action to the next. Much like the panels, once the danger has passed, he returns to a more natural light and look for everyone.

Next issue will see Aphra teaming up with Luke Skywalker in The Screaming Citadel crossover with the main Marvel Star Wars book. It seems Aphra can’t help but get herself mixed up with Skywalkers and their problems. I’m definitely ready to see how these two personalities clash next month.