Spoilers ahead for Star Wars #33 and the franchise as a whole.

After escaping the Screaming Citadel, it seems Star Wars is taking a few issues to explore some relationships, starting with the galaxy’s favorite twins. Luke and Leia start the issue stranded on what might be the sole island of an ocean planet.

We don’t learn much about Luke this issue; the narration and most of the dialogue come from Leia. We also avoid the cliché pitfall of having two characters stranded on an island together: incessant bickering followed by last-minute bonding. Instead, Leia and Luke get along very well from what the readers are shown. The princess takes charge, first by convincing Luke to help her catch a very large fish for dinner.

They spend three weeks together on the island, scavenging for food and trying futilely to fix their ship. Of course, Luke is surprised to learn that Leia is so adept at surviving in the wilderness. It turns out she ran away from home several times as a child—something she admits she doesn’t regret—just like Luke did, except she managed to hide far longer. It’s a great look at their differences and similarities and manages to pull at my heartstrings. 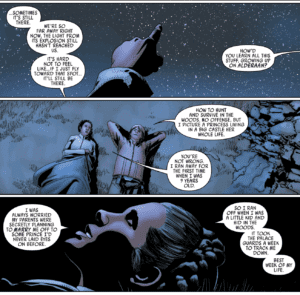 The scene where she and Luke are under the stars and she admits she can sometimes see Alderaan is both clever and unbelievably tragic. The two are so far away from where Alderaan was that the light of its explosion hasn’t reached them, so for a moment Leia can allow herself to believe she’d find it again. Her speech about how there are so many people that have dreams and are looking for peace is one of the reasons Leia is a great hero like Luke. She might be angrier and more pragmatic, but she doesn’t let the countless tragedies stop her from seeing every day as a gift and fighting to help others.

One thing that seemed a bit odd was the introduction of their underwater friends. They show up towards the end of the issue to let the twins know they aren’t alone on the planet, but that’s about it. We aren’t even given their name. Perhaps the brief time spent expositing on their trip underwater could have been sent on Luke’s side of things. I do wish this issue had been able to cover a bit more of the young Jedi’s perspective—at least a glimpse into his thought process throughout the three weeks would have been nice—but I understand the need to keep it focused on Leia. This is not the first time the comics have tried to add more time for Leia to grieve for her planet, and this issue also afforded Luke the chance to comfort her a bit. 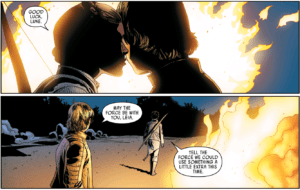 I love seeing these two working together. It’s a team-up that can never get old.