Spoilers for “The Screaming Citadel” and Star Wars #32

I still don’t understand the need to make the main trio look so overly-rendered. We know who we’re supposed to see when we look at them, but they are not the only characters in Star Wars. Having an overly realistic Han who looks as much like Harrison Ford as possible standing beside a character with no real-life counterpart for a reader to reference looks uncanny.

But I won’t spend any more time on that. It’s just not the art style for me, but I’m sure it works for others. Instead, I want to focus on what we learned about the symbiotes and what that might mean for the rest of the crossover.

It turns out the Queen’s power comes from being connected to the symbiotes as well. Or at least some of it, as I doubt he life force draining magic she uses belongs to those gross looking bugs…. She is the Queen because she is the most powerful mind in the “hive”, and that’s where it’s great to have an archaeologist on the team. Aphra figured out the Queen’s secret and has a plan of her own to get herself and Luke out of trouble.

Yes, Aphra decided to rescue Luke. Kind of? After a conversation with her new sentient, glowing green rock, Aphra realized that Luke matters to her because he is everything she isn’t. It’s true. Luke is the naïve, idealistic type that trusts others and doesn’t hesitate to help others or call a backstabbing archaeologist a friend. He’s a true hero, and Aphra probably never will be. And while she does come back to “save” Luke, she does so in a dubious way that will have some real consequences for both of them. Since the hive is controlled by the strongest mind, is there any doubt that a Jedi would fit the bill? Based on Luke’s declaration, I’m expecting the final issue of “The Screaming Citadel” arc will explore a darker part of his personality. 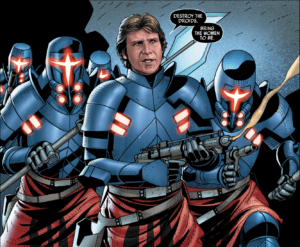 Elsewhere, we have a symbiote-possessed Han tracking down Leia and Sana. I’m kind of disappointed all Han’s gotten to do this arc is be a puppet. We aren’t shown whether he manages to capture either woman and place them under the Queen’s control, but I have a feeling they’re safe for now. Having Luke and Leia linked telepathically via strange alien mind-control might raise a few questions and throw some kinks into the continuity.