Sleight is the feature-length debut of J.D. Dillard. The writer and director of this film, is a past Bad Robot employee and music video director, who has brought us a new coming-of-age in Los Angeles story that is similar in its set-up, yet still unique.

Official synopsis: A young street magician (Jacob Latimore) is left to care for his little sister Tina, (Storm Reid) after their parents’ passing, and turns to illegal activities to keep a roof over their heads. When he gets in too deep, his sister is kidnapped and he is forced to use his magic and brilliant mind to save her.

OK, so that’s the official description. But what can I tell you about the movie, that doesn’t reveal too much? Magicians can never tell an audience how a trick is done, and this is also true for Sleight. What we have here is the story of a super intelligent young man, an inventor, who thinks he is street smart, but is truly just a naive little boy. Since he thinks he can’t support himself and his sister on the money he makes performing street illusions, He gets involved with drug dealing. But rival drug dealers and the lure of more money, cloud his judgment, and things get out of control quickly.

Bo deals cocaine to frat kids and yuppies, despite the worry of his friend and neighbor, who helps with his sister. After meeting the independent Holly, (Seychelle Gabriel) who falls for him and his magic, he starts to think it’s time to leave LA and find a better life for them all. This starts the motion for the first of his mistakes. The ruthless drug dealer he works for, Angelo, (Dulé Hill) catches him undercutting him and gives him a very short time to pay all the money he owes him. Stealing the money from a friend, and then losing it, is screw up number two for our Bo. 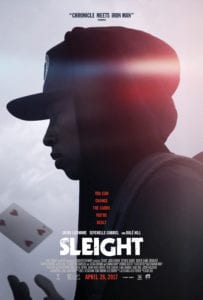 Bo comes off very sure of himself when on the streets, impressing everyone with his sleight of hand tricks, but inside he’s just a scared kid, who knows little of real life. It’s perhaps these adolescent contradictions that allow him to make the amateur, but crucial mistakes with Angelo’s business. Bo means well, but continues to make errors in judgment.

Without giving away spoilers, we soon find out what is behind Bo’s magic and when things go wrong and events are set in motion the thriller really takes off.  I feel like some of the cards were shown too soon, (pun intended) by showing us his source of power early on, but it’s still really cool- reminding me a little of Magneto. By the end, we watch as Bo tests the physical limits of his “power” to save his little family.

I had to wonder why Bo didn’t take the scholarship that was offered to him in the beginning and start on the right path to helping himself and his sister. He had help from his neighbor, and one would think he could have worked out a way to take care of things without drug dealing. It’s fast money, but the whole gang-banging thing is so cliche.

I enjoyed Sleight a lot, despite some obvious newcomer mistakes and a small budget. Dillard and Co-writer Alex Theurer’s writing was competent and it did not have the look of a low budget flick. The acting was really good, especially by Latimore and Hill, and there is a lot of talent on both sides of the camera. When Sleight finally lets its magnetic hero lose on the bad guys, and the genre elements really show themselves, the film becomes explosive in its tension and sheer energy. I would have loved to see more magic, and hope if there is a follow up movie, that we get to see the new illusion that is intimated at the conclusion. Sleight is a mix of science, magic and love of family, that makes this a film worth watching.

Sleight will be in theaters starting April 28th, 2017