Issue 12 is the final issue of Silk, something I din’t realize until things were winding down. The good news is that this felt like a proper finale that resolved the major themes that have driven the character of Cindy Moon through twenty-six issues. This has not been just a story about Cindy finding her family while performing super heroics around New York City. It’s also been about Cindy coming to grips with the ramifications of her ten years spent in a bunker.

It would have been easy for someone to take this character and gloss over the huge impact ten years of isolation would have on someone. Cindy is a superhero, after all! She has battle quips, she swings from buildings, beats up the bad guys, and does everything a spider-themed hero should. But Robbie Thompson took Cindy Moon, with all her baggage, and gave her a wonderful arc about anger, depression and finding acceptance.

Because this is the final issue, it is difficult to do an in-depth review of the issue’s story without spoiling any of the major events that have taken place in Silk over the past two years. It’s especially difficult because there has been such a clear overarching narrative from beginning to end, and most of the issue is spent tying up all the loose ends. The issue opens with Silk facing down a woman named Fang—a colleague of Ezekiel, the man who put Cindy in that bunker to begin with—who is after Cindy’s powers. There have been several times throughout the story that Cindy has felt conflicted about her powers. After all, they are the reason ten years of her life were stolen from her, so can anyone blame her?

Another major, reoccurring problem Silk has faced is her attachment to the bunker. I’d go as far as to say if Silk has an arch-nemesis, it’s that bunker. Even though she was trapped there, it was where she felt safe. In the first issue of Silk, back in 2015, she even returns to it of her own free will. Fang offers/threatens to not only take Cindy’s powers, but put her back in her “precious bunker.” 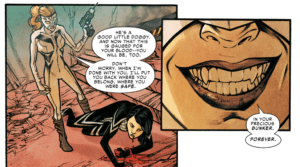 Silk’s reason for refusing is simple, but it’s also earned. This issue, like several before it, is framed by one of Cindy’s sessions with her therapist. One thing I hope the Silk team takes pride in is their depiction of Cindy’s mental health. Her anger at being told she needs help, her struggle in accepting it, her decision to engage with therapy, were all important steps in her story. I am glad that this story does not end with Cindy declaring herself “cured” of all her problems, just like she was not “cured” of her powers. Her powers are a part of her, and so is her depression. It’s great to see how far she has come.

Tana Ford’s art style might not be for everyone, and I certainly had some issues with it at first. But reading the series over time, Ford’s depiction of Cindy in action became as much a part of Silk as Ian Herring’s colors or Thompson’s script. These three just worked well together, and I will miss them as a team.

There is another great callback to the first issue of Silk that I will not spoil, as it is another moment that is best when earned through reading from beginning to end. Overall, Silk #12 was a clear, heartwarming sendoff to a wonderful series. I don’t for a second think this is the last we’ll see of Cindy Moon, and I can’t wait to see where she lands next.