When the newest Power Rangers comic was announced from Boom! Studios, it was advertised as a series that focused mostly on the kids and their personal lives outside of fighting giant monsters-of-the-week. It seemed like an interesting idea, considering there is already another comic that focuses on their later adventures, so I wanted to check it out. 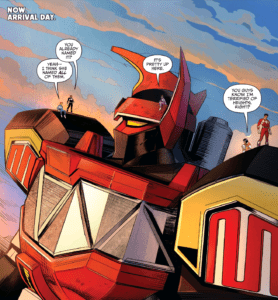 fight against Goldar. After a beautiful scene of the five teens standing atop their enormous Megazord, the story begins to introduce us to them each one by one. The very yearbook-like format of introducing the team’s likes and dislikes was pretty clever, but just like in the television show: none of these kids look like sophomores in high school. Not even Billy, although he is the closest to a believable teenager. Still, the art itself is gorgeous, with clean lines and bright colors. I’d flip through this issue for Dan Mora’s style alone.

I was expecting there to be a bit more to their high school experience than what this issue provided. Everyone likes Zach, Jason is a loner, and Billy gets bullied. Kimberly is currently dating a new character named Matt, who appears to be good friends with everyone in the group. I imagine he will serve as a point of conflict as the teens with attitude try to juggle their personal lives with being “space ninjas”. He seems too nice for his own good.

I was a little disappointed by how little Trini gets to do on her own when the other four have more establishing moments. Outside of their suits, she and Kimberly seem mainly focused on their love interests—Trini on her crush and Kimberly with her boyfriend. Kim even delays going on a mission to spend more time with Matt. I’m not saying love isn’t an important part of the high school experience, but there are plenty of other high school tropes for the team to explore.

There is still some great Power Rangers action though, as the team goes to rescue the astronauts on the moon. Even though they’re still relatively new to being a team, Ryan Parrott shows that they all have great chemistry when working together. They all seem much more self-assured when fighting than they do dealing with bullies and high school crushes, which I imagine will be an important aspect of the story moving forward.

Overall, the book is a good jumping on point for anyone who isn’t familiar with the original series and wants to start from the very beginning with these characters. But that doesn’t mean there isn’t anything new for old fans to enjoy. I especially love the focus on how Angel Grove and its residents are dealing with the sudden arrival of evil aliens and the destruction of their town. It’s a fun first issue that does what it needs to, and I’m looking forward to the next one.