I’ve known Patsy Walker, A.K.A. Hellcat was ending for a while before this issue came out, but I still wasn’t ready to say goodbye. Hellcat has been a wonderful series, and while most plot threads were tied up in the previous issue, this one still contains everything that made Patsy special.

The plot of Hellcat #17 is something straight out of a sitcom: Patsy gets a massive check in the mail, so she takes all of her friends out shopping! Well, almost all of them. She-Hulk has been absent from Hellcat since Civil War II concluded, and to say her absence was felt doesn’t sound good enough. Throughout the first half of Hellcat’s run, Jen was a constant presence. She was Patsy’s best friend, and her coma was incredibly hard for Patsy to deal with. Although this series has never really dealt with the wider Marvel universe, Civil War II still managed to affect its trajectory in a profound way. It allowed Kate Leth and the team to take Patsy to a very emotional place.

I feel it’s important to point this out, because that check didn’t just fall into Patsy’s lap. Jen sent it to her! I mean, of course she did, she’s still Patsy’s lawyer… but those opening moments where Patsy is reading Jen’s letter meant a lot to me as a reader of both Hellcat and Jen’s own series, Hulk. The friendship between these two optimistic heroes is special, and highlights an important aspect of Patsy’s character: she might be bubbly and cheerful, but that doesn’t mean she can’t feel depressed, lonely or hurt. Her reacting to Jen’s letter was such a wonderful moment, and the perfect way to start the final issue.

The rest of the plot is typical Patsy fun and humor, and makes a lot of references to earlier issues of the book (I almost forgot how many earlier issues took place in this same mall). Patsy is one of those characters that tends to befriend most of her villains, and that is played with here. Not that I’d call the two thieves she and her crew deal with actual villains…. 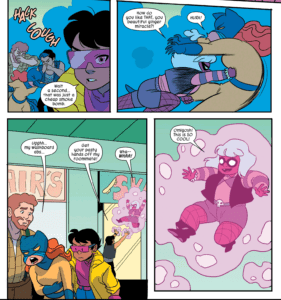 I love that Patsy deals with most of her problems, in the end, by talking them out. Whether it is her offering support to a villain, or her friends (and sometimes villains) offering support to her, she allows herself to grow. And through this, Leth made Patsy a role model for all ages. She has helped teens, adults, and even demons learn to accept themselves for who they are. The supporting cast of characters were colorful and diverse, and were each given their moment to shine in this final sendoff.

Brittney L. Williams and Rachelle Rosenberg continued to make every panel bright, fun and colorful up to the very end. Switching from exaggerated and cartoony to slightly more realistic proportions without warning always fit perfectly with Patsy’s personality. This was a book where the team always felt completely in sync with one another. Every panel in this issue brought a smile to my face with the art alone.

In her letter to Patsy, Jen promises “I won’t be gone forever.” I do hope the same is true of Patsy, Ian, and the rest of the Team Hellcat. It was a heartfelt ride, that ended with a great love-letter to its readers.