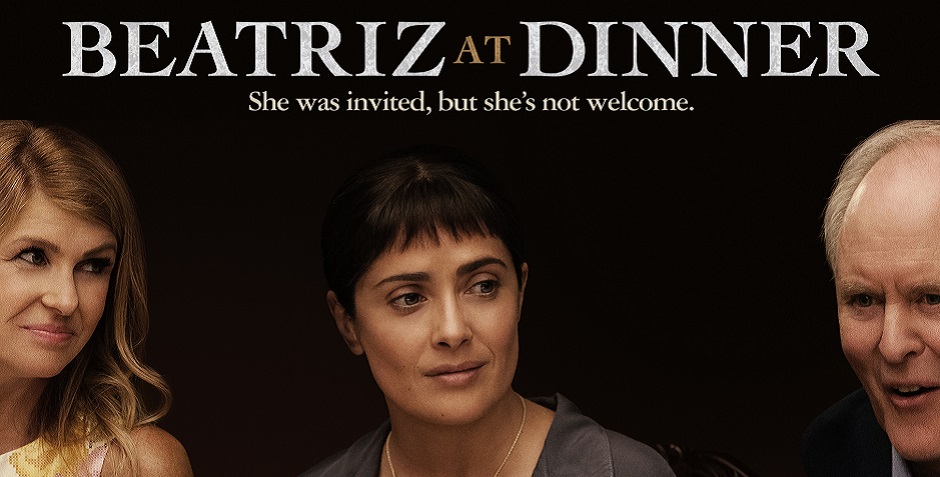 Salma Hayek plays Beatriz, an immigrant from a poor Mexican town, who was pulled towards a career as a holistic health practitioner by her innate kindness. Doug Strutt, played by John Lithgow is a smug, real estate mogul. Fate brings the two together at a dinner party, in a cultural and political collision that leaves audience shifting uncomfortably in their seats.

Beatriz has taken on Cathy as a massage client. The caregiver helped strengthen Cathy’s daughter after cancer treatments. Cathy’s grateful to Beatriz and really believes the work she does is important. Beatriz is introduced as ‘almost a member of the family’. But by the end of the movie we learn the limits of that gratitude, belief and family ties.

Beatriz is worn down from all the care she has given others over the years, even her car is sputtering and tired from all the miles between cancer wards and elite clients’ mansions. When Beatriz’s car finally breaks down, she is invited to stay for dinner. 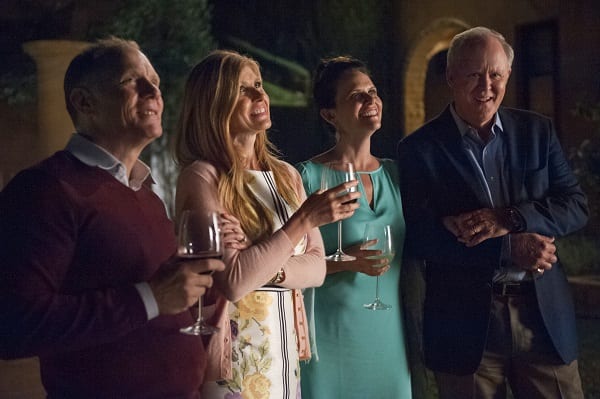 Beatriz at Dinner is the Thanksgiving dinner you fear, when your vegan cousin arrives at Rush Limbaugh’s feast. The dialogue is so natural that when casual talk turns to significant issues, it stings the viewer. The director and writer hold a mirror up to the audience and we’re left looking away or hoping to change the subject. 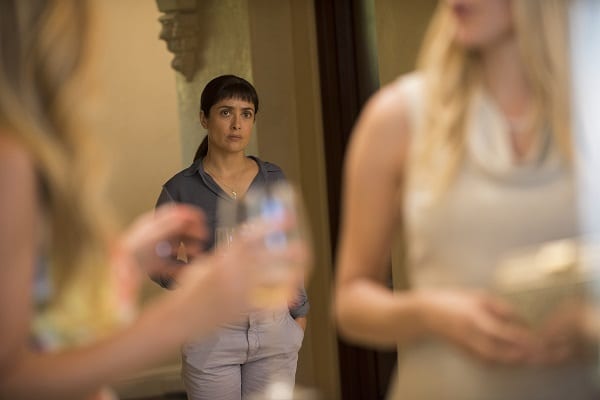 The acting is riveting for all at the table. Salma Hayek’s quiet and steadfast role has a Rain Man quality. In interviews, Hayek has said that it gave her great freedom as an actor, to not wear makeup and have long moments of silence on camera. This is the best acting of her career, period. She single handedly creates all the suspense. 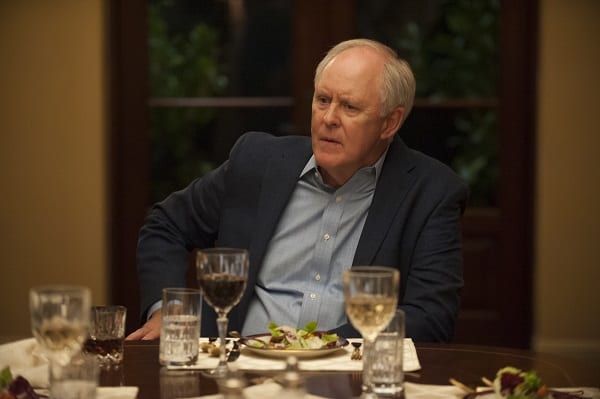 John Lithgow is the yang to Hayek’s yin, an ego driven businessman surrounded by minions. Many reviews and previews are calling him a businessman in the “Trump Era”. He is not. Lithgow is more subtle and poised. The subjects tackled in the movie have been around for generations, they are not a new era. Lithgow’s character is charming, and handles the tense situations eloquently, compared to the guests who want to champion their icon for personal gain. Even though he knows he has the upper hand, he seems to admire Beatriz, while maintaining his image with his followers. 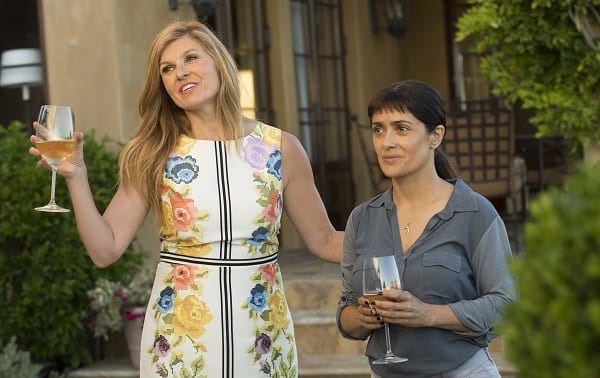 The performance no one is talking about is Connie Britton. She plays Cathy, the complicit housewife with a heart. She wrongly believes if we’re polite and don’t talk about harsh realities, they magically disappear. She is superb. 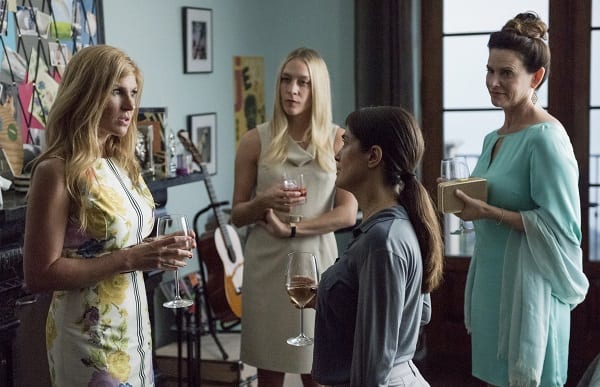 I can’t help but make comparisons to Hayek’s earlier films. The dinner party starts as a culture clash comedy like Fools Rush In. The tension builds, and one expects Beatriz’s brooding and intense exterior to break into her Dusk till Dawn character. This is where this movie works well. The interaction is so uncomfortable that a suspense thriller develops.

The film highlights the opposite ends of the spectrum, that have become the conversation in our society right now – the stoicism of a vegan extreme, versus the reckless indifference of the privileged. The ending is a head scratcher, offering no resolution. But isn’t that the way with casual dinner conversation?

I am splitting the review for this movie. If you want to see some amazing acting and Salma Hayek’s best work, I give it an “A-”. If you want an art flick, I give it a “B”. It has all the symbolism and themes to make for a great Indie film and creates a believable microcosm for the issues pressing our world today. But if you go to see the thriller suggested by the trailer, I give it a “C-“. It does have suspense and leaves the audience wincing, but not as a murder-mystery dinner.

Home » Featured » Review of ‘Beatriz at Dinner’: When an Inconvenient Truth Comes to Dinner