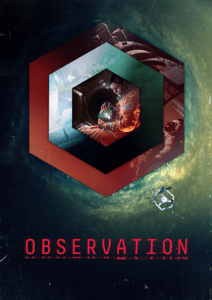 I have played plenty of adventure games in my time. That is not a brag, just a fact. I never seem to make it through them however. I get into them and after a few hours the shine can wear off of these “walking simulators”. Observation manages to not only keep you going, but confuse the heck out of you in the process. In a good way that is.

In Observation things take a bit of a turn. You play as an artificial intelligence unit for a space station, which has the same name as the game(rhymed on accident). Sam (System Administration & Maintenance) can jump from camera to camera throughout the station, unlocking doors, accessing laptops, and utilizing his skill set to help the one known survivor, Emma, to figure out where the rest of the crew is and what is going on after some unknown occurrence.

The plot is one Hideo Kojima himself might drool over. It is too easy to wonder what in the world is going on as you maneuver through the story with random interruptions that seem alien in nature. Several twists remind me of Christopher Nolan movies like Inception and Interstellar. By the time you make it to the end, you feel even more unsure as to what you witnessed. The very ending cliffhanger will leave you stuttering. At least once I finished Bioshock Infinite I got a hang on what happened within twenty minutes of finishing it. Observation, while well crafted, tells a head scratching tale.

There are plenty of little things to find as you traverse the space station. I found out by accident you could turn laptops on by clicking the power button for a power outlet. With that revelation I started messing with everything that showed up on my screen, whether a note on a wall or an audio log. Not only does this help you to complete the game, it unlocks tidbits of the story that adds to your understanding of it.

The controls are extremely simplistic, navigating your way through different series of menus and mini-game style puzzles. I feel like I need to say it, this is not a bad thing. It flows, and you stay immersed in the story because things do not get too complicated. Flying around the station in your CO2 powered sphere is a nice change of pace, especially in some tense sequences, but the controls for it can be touchy. Take it with a grain of salt though, because you are admittedly in space where movement without gravity can be different.

Graphically the game looks really good. It is not a champion of arts, but the station is fantastic. The few moments you spend in space are amazingly done, with the scale modeled wonderfully. Another game I have played that looked similarly as nice was the Turing Test (which involved an AI as well). I also appreciate the minimalist horror-type soundtrack that keeps your suspense at a high for the entirety of the game. A good game has quality music, a great game knows how to use it.

This is usually the part of the review where I would take a moment to tell you what I would fix or change in the game. Honestly? I do not see a need to make any adjustments. The guys at No Code made a phenomenal adventure that you should play. It may have messed with my brain a little, but it is these kind of thrillers that keep me immersed in the gameplay. I highly suggest you pick up Observation at your earliest convenience if you enjoy a good suspenseful story.

You can purchase Observation for PC through the Epic Store here and for PS4 here.