So, does anyone else feel like Justice League of America is setting up to have Batman eventually leave the team? That was the impression I got when reading this issue. Vixen appears to have taken charge of the team, both in front of the press and out on missions. And with so much emphasis placed on the JLA being public heroes, as one reporter points out, it is strange to have the most private hero standing beside them.

Coming from their first real mission together as a team, the JLA presents themselves and their headquarters to the world. I cannot imagine their very public facility will remain safe for very long—the entire island just screams “giant target”. For now, though, they can mingle with the public and the press. This is also how they come across their newest mission: to help a small town get out from underneath a warmonger’s thumb.

Rescuing a group of people by helping them revolt against their oppressors is almost too similar to the first story arc, only this time it’s on a much smaller scale and with a more eccentric villain (those weapon designs sure are something). Much like Green Arrow, this series has major political undertones. The citizens of Penn City are living in poverty, and were willing to take whatever deal they could to support their families. The last arc dealt with safety at the cost of freedom, and this one looks to be about survival at the cost of safety. Both are real issues that deserve to be examined, and I am not faulting the book for choosing to explore them, but it is important that this arc ends up distinguishing itself in some way. At the moment, this issue retreads the same setup: come in, rally the people, tell them the JLA is there to listen and help, and then it’s time for a fight. 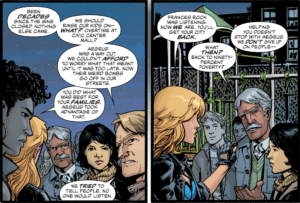 Even with a large team, I appreciate how every member is given at least one moment to shine. Steve Orlando is great at depicting the different dynamics between team members, and making them all feel useful. It makes for some odd couplings, especially whenever Lobo is involved. However, I believe the true standouts are Killer Frost—excuse me, just Frost—and Ray. Caitlin Snow is a reformed villain, but she’s different from Lobo who seems to be doing whatever he thinks is fun at the time. She’s trying to change, and her teammates support her. Ray is still incredibly shy as he adjusts to public life, but he is the one who makes the clear choice to help Penn City. Both of these characters have been given room to grow, and I hope the book continues to explore that. 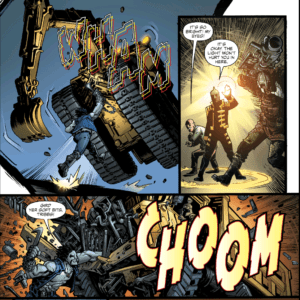 I wanted to pay special attention to Clayton Cowles’s lettering in this issue. There are a lot of explosions—usually caused by the Main Man hi—and a lot of moments that require sound effects. It would be easy for these to come across as an afterthought, but Cowles fits seamlessly with Andy MacDonald’s lines and John Rauch’s color.