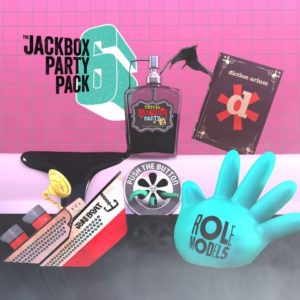 I play a whole lot of video games, but I do the majority by myself. Single player is where I usually go, but on occasion I have friends over. We used to look for different games to play, but now we turn to one alone, the Jackbox Party Packs. These hilarious mini-games keep us entertained for hours. With Jackbox Party Pack 6 releasing, I am here to tell you just how much fun you are about to have.

So, if you didn’t know, the Jackbox Party Packs are games to play with other people. All support multiplayer and instead of controllers, you use your phone. This is always handy, as many of us lack controllers but own phones and tablets. It’s easy to play as all one must do is jump to a browser, go to Jackbox.tv and enter the room code listed for each party game. We played all of them, and they are listed in order of least to most favorite.

This is our least favorite, but it has a good idea behind it. The  concept seems to be taken from the classic “Mafia” game you may have played at school when bored. You crew a space vessel in which the artificial intelligence has been sabotaged. The reason this happens is some of the crew are actually aliens.

Taking cues from the styles of “Fakin’ It” from Jackbox Party Pack 3, you have to figure out who the aliens are. Only then can you “push the button” and launch them into space. You do this by putting a few crew members at a time through challenges. These range from drawing, opinion, deliberation, and writing. As with Fakin’ It, the faker/alien does not get the same prompts everyone else gets. You must simply do your best to explain away any discrepancies there might be.

This game was much more complex than the others for us. Push The Button has a captain each turn that picks players to put through trials. It makes things a bit more hectic. Add in the aliens also get some special abilities and it gets even more confusing. The key to this one is talking amongst yourselves, and with the prompts being more all over the place it was harder to comprehend. Not to mention each mini-game only including a few people.

We also had issues with it while playing. Twice the game froze in the middle of our match. It could have been network problems, but none of the other games suffered from this.

This one took us an extra second, but we picked it up pretty quickly after. The game gives you a word or phrase and asks you to invent a definition for it. From there you develop a synonym, and finally, a sentence for it.

This is fun because it allows the player to use more of their creativity and have fun. Our word was chattebro, which I defined, “When a bro and a bro need to have a talk bro”. This one is simple, and you’ll most likely finish it in a few minutes. I’m not sure if it will stay fun for a long while, but I’m sure a group of friends could come up with many silly definitions. 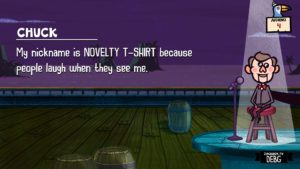 We had a ton of fun with this one. You take the role of a comedian aboard a crappy cruise ship. The game gives you prompts to enter that will go into a pool that everyone will get choose from. From there the beginning of your joke is crafted, and it’s up to you to build a punchline. Like many other Jackbox games you face off with another player, with the rest voting on who had the best joke.

The second part of this mini-game is the best part. You get the chance to pick between two previous jokes and rewrite the punchline. Sometimes you get the short end of the stick and have to rewrite a perfect one, but often I had a fun twist to add. The only thing I would have liked is having the joke read for you like “Mad Verse City” from Jackbox Party Pack 5. The option to read it yourself is there, and it asks if you want it read for you, but it’s just gibberish as your joke is written on the screen.

Role Models is neat. There isn’t really a chance to be super funny with it, but I give it high marks. It gets them because it pushes you to interact with your group and maybe learn a thing or two about each other.

You are part of a scientific experiment in Role Models. You choose a category, and then you have to figure out which selection to attribute to which player. For instance, we chose Star Wars heroes for one of our “experiment”. For My brother-in-law and sister, I chose Han and Leia. Each round works out like this, with little interruptions when players are very similar or opposite. At these junctures, you must choose who fits the selection the game offers.

You accrue points when you make selections along with the majority of the group. That didn’t make a lot of sense right at the beginning of the game, but we figured it out as time went on. The best part of Role Models was the end, when it tells you who each person is based on the choices made for each player. While not one where you’re pushing to win, this one really gets you involved with each other and is best played in the same room (as opposed to streaming).

So this is by far our favorite. We absolutely love Trivia Murder Party from Jackbox Party Pack 3. We mostly prefer games like Quiplash where we can play to each other, but Trivia Murder Party is the perfect competitive game for my group. The premise is simple. A serial killer has you trapped and you must answer trivia in order to stay alive. There are super fun and unique mini-games for ones who answer wrong to try and stave off death for another turn.

The best part about Trivia Murder Party is you don’t really die. And I’m not talking about real life because you’d never play the game with that risk. Even if you lose early on, you can keep answering questions for a better shot at the final round. You reach this once only one player is left alive. In this one you are trying to get multiple choice questions right to take steps towards a door to be the first (and only) to escape. It runs in a check all that apply format. For instance, a question could be, “What all are fruit?” with the answers, tomato, celery. If you pick tomato and leave celery, you get both right and two steps. 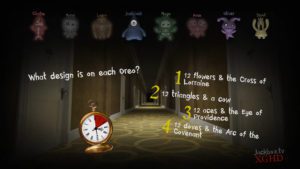 The ghosts (dead players) have an extra choice in this round. If they get it right they could have up to three steps to take towards the door. If a ghost catches the “alive” player, they can “steal” their body and proceed to the escape point. This round gets really hectic for us, we are yelling and trying to be that one. A change in the formula threw us for a loop though. To escape, you have to select all three options of the current question correctly to escape. I love this change to the game as it adds even more competition!

The last thing I want to add to this review is the parental controls. In a world where nothing seems to be filtered, I thank the developers at Jackbox Games for this option. We play in a very family friendly group so we appreciate the ability to turn off raunchy content. Any of the Party Packs will be appropriate for the mot part no matter what setting.

In any case, Jackbox Party Pack 6 is a great collection. Not every game hits the mark, but the majority will be worth hours and hours of laughs and competition. In my opinion it’s worth it just for Trivia Murder Party 2. That’s the best thing about the Jackbox Party games though, with five different games to play, there is sure to be something for everyone involved. Now can I please get an Earwax 2 in Jackbox Party Pack 7?

*The review code was provided by our partners at JackBox Games. Jackbox Party Pack 6 is available now on PS4, Xbox One, Switch, Mobile, and PC. Go to Jackboxgames.com to find a link to digitally purchase your copy now!