Ironheart is starting to come into her own as a hero. In this latest issue, we are starting to see her future superhero career take shape. After teaming up with Pepper Potts, Riri’s alter ego is front-page news. Now, after seeing how she got to this point, it’s time for Riri Williams to make a choice.

Most of the issue serves as a set-up for the next big adventure. With Ironheart’s picture on all the blogs and news sites, opportunities are popping up everywhere. As AI-Tony says towards the end of the issue, “When it rains, it pours.” A bit ciché, but still true. That is partially why I say this issue is mostly a set up: we see the three offers Riri is given, and we are told that she is “physically upset” by the pressure, but we do not get to see her full emotional reaction. 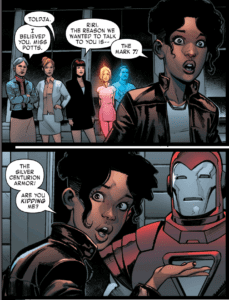 I think it’s important that a character, no matter their age, has aspects that readers of all types can relate to. Now, not everyone can relate to being a super-genius in a flying suit she built with technology borrowed from M.I.T…. but the pressure to choose between multiple options without wanting to let anyone down is certainly a hurdle many people face. I also love Riri in particular because of her optimism in spite of her past. While some of the other teen heroes of Marvel have been dealt more closely with the aftereffects of Civil War II, Riri is still fresh on the hero scene and brings back the awe and excitement that comes with it.

I mentioned Caselli’s wonderful expressions already, but his teamwork with Marte Garcia has to be seen to be truly appreciated. Personally, I could look at Garcia’s colors all day long, and Caelli brings each character to life with a unique look and body language. Bendis’s script also allows Clayton Cowles to include a fun visual gag in his lettering. The three of them make every page clear and beautiful.

In terms of the larger plot, I do wonder if this is setting up a crossover between Bendis’s two Ironman books: Invincible and Infamous. Doctor Doom doesn’t make an appearance, but his home certainly does. With Doom playing hero, Latveria is suffering from a power vacuum – looking to be filled by another of Bendis’s own creations. It seems Riri might have to do a bit of international heroics soon.

If that’s the case, I do hope her supporting cast can make the journey with her somehow. The opening scene with Riri fangirling over Tony’s lab while his mother, Pepper and Mary Jane look on was a lot of fun. Especially when Friday and AI-Tony join in.

Although, my favorite relationship is the one Riri has with her own mom. She appears briefly in this issue, but it is a moment that matters and shows the trust between them. If Riri does have to deal with the problems in Latveria, I would hate to see that relationship receive less focus because of it.

I’m curious to see which of the three options Riri will choose, or if she will have a fourth option waiting in this brewing international incident. I have a sneaking suspicion I know which one it will be. Still, I’ll have to wait until next issue to see if I’m right!