Spoilers ahead for Immortal Iron Fists #1

I tend to read most of my comics digitally, it’s just easier that way and takes up less space. But this week, Comixology and Marvel have released the first issue in a six-part exclusive comic: Immortal Iron Fists. When I first saw the notification, I wasn’t sure what to expect. There are plenty of comics that are “digital first”, like DC’s Injustice or Bombshells, but those are released in small chunks every week before being collected into full-sized issues. Immortal Iron Fists is different—it’s a full-sized issue you can only get from Comixology (and Kindle). That in of itself was enough to pique my interest. 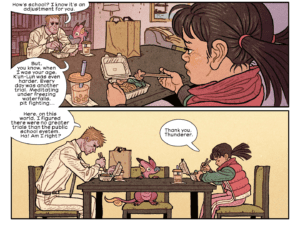 I was surprised by how little time was spent establishing who Pei was for new readers, considering it has been several years since her last appearance. I would honestly recommend reading up on her debut before delving into this new series just to get a better feel for her personality, and her relationship with Danny Rand. It’s clear that while Danny cares for Pei, he just can’t quite understand what she’s going through at school. But, as Danny points out he had a huge adjustment from his old life to living on K’un L’un. That dynamic between them, and how they can relate to one another, is the part I’m looking forward to the most.

Because this is a mini-series, everything moves very quickly. Instead of spending the entire time on the relationship between the two Iron Fists, which could fill multiple issues on its own, Immortal Iron Fists #1 focuses on setting up the various plot threads that will carry us through the next five issues. There’s outrageous school bullies, mean girls and a mysterious threat for Pei; and mystical demon pigs (and a possible Spirited Away reference?) for Danny. We are also introduced to a Pei’s new nanny, named Madame Yeoh… who I have not decided if I trust quite yet. 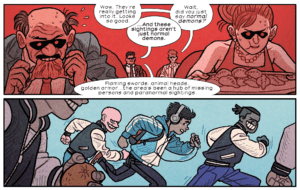 My favorite part of Iron Fists is its art style. While Kaare Andrews drew an incredible cover which would have also made for a great interior, Afu Chan and Shelly Chen create a unique and colorful New York for Pei to explore. I appreciate that the issue was written and drawn to show a back and forth between the two Iron Fists and their missions, although I don’t feel like readers were given enough time with either. There’s a lot going on, and a lot for Andrews and his team to juggle, but I’m interested to see where these plot threads lead.