Spoilers ahead for Hawkeye #7

There wasn’t enough Lucky the Pizza Dog in this issue, but other than

that it was great. Filled with flashbacks to Kate’s childhood, we get several glimpses into her relationship with both her mother and the father she has been trying to track down. It’s clear that Kate still cares about her (presumably dead) mother, and goes on a one-woman warpath against Madam Masque’s headquarters after the super-villain sends her the necklace that her mother always wore.

I went back to the previous issue to take a closer look at Kate’s board, to see if I could find any clues of my own that I didn’t catch the first time. There was a reference to Madam Masque that I completely missed, but not much else. Still, I love the attention to detail.

I also loved how the flashbacks were displayed. I could read an entire issue in that monochrome style. Jordie Bellaire’s color is great across the entire issue, but the flashbacks are absolutely beautiful. It was also hilarious to see that Kate’s love of hip-cutout attire started when she was… like six, or something.

In the present, Kate heads to kick Madam Masque’s butt. Her friends and Detective Rivera notice there’s something off about Kate, and it’s a nice reminder that her perpetual optimism and bad jokes takes some effort. After that, the rest of the present-day is all action. And unlike the dragon from the last arc, this wasn’t a fight that could be solved through just talking it out. Going from panel to panel as Kate tears her way through a floor full of henchmen is great. Just before she steps out of the elevator, she has a plan. She knows where she needs to go and she knows how to make it happen. Leonardo Romero is great at drawing action, and although things did get a little crowded during the splash page, every move makes sense and nothing is wasted. 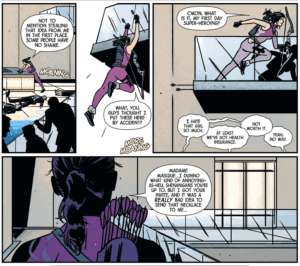 When I saw the triangle motif in Masque’s headquarters, part of me suspected that it would be Kate’s mom that was waiting at the end. There were only two real options for who would be sitting in the penthouse suite: Kate’s (maybe not so dead?) mother, or the father of the year. I’m looking forward to a nice father-daughter chat. If Kate’s banter and deflection annoys Detective Rivera, I can only imagine how her dad’s going to feel.