Kate and Jessica make the perfect team. This two-issue mini arc has been especially fun because Jessica has gotten a chance to see Kate a bit more grown up. Jess has been there from the start of Kate’s career, in a way, serving as a supporting character in the Young Avengers. Now she gets to see Kate solve the case and save the day. With her help, of course, but still….

This issue also featured the return of Kate’s sidekicks—I mean friends. I like her supporting cast, and hope that they do serve as permanent additions to her agency. Apart from Quinn, none of them do much here apart from gape at the rampaging dragon on television, but there’s still plenty of time for them to be developed and I hope Thompson has something planned for the budding Team Hawkeye. 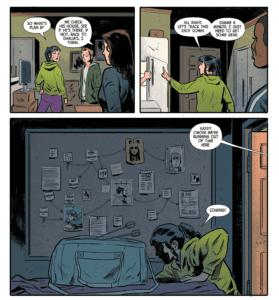 There were also fewer moments where Kate’s observational skills came into play here. Instead, she solved the problem through just talking it out. Recognizing that the ‘villain’ wasn’t dangerous, just scared and confused, is always an important trait in a hero. Punching first and asking questions later only leads to trouble. Although I can’t blame Kate for trying to shoot down the dragon at first, it’s important that she took a moment to calm down and see the situation for what it is: a scared Inhuman girl who needs help.

“It’s time for us to grow up,” says Kate. And she has changed a lot since Young Avengers. As I said before, having Jessica with her again helps to illustrate that. She might not be saving the world from time-traveling supervillains anymore, but she is helping people all the same. And although this whole arc may have seemed like a bit of filler at first glance, Thompson and Walsh do drop some hints in the dialogue and art about where Kate’s story might be headed next. 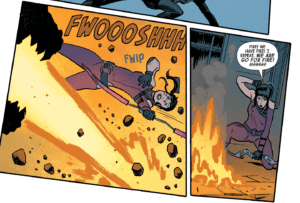 Unfortunately, the art in this issue felt a little incomplete in some areas. A few of the panels on the final pages were squished together, and a profile or two made it look like Jess was missing the back of her head. But I still appreciate the consistency in paneling: only shaking things up when the action calls for it. Despite a few hiccups, the issue is still a fun read.

It seems our little team up has ended for now, but the final page does provide Kate with a new partner that’ll excite any Hawkeye fan. Now, it seems, the investigation into her father is getting back on track in a big way.