Spoilers ahead for Green Arrow #27

Well, I kind of assumed that this cross-country road-trip would take its time, but I was wrong. Green Arrow #27 opens with Oliver and Barry already arriving in Washington D.C. I honestly would have liked to see the two have some fun adventures on their trip, but I understand that might distract from the story at hand….

However, now that they’ve spent more time together off panel, the two seem to be on better terms. Not that Barry sticks around for very long. As soon as he canvases the crime scene, he’s off to his lab to process the evidence. After that, it’s time for another Justice League cameo: Wonder Woman! 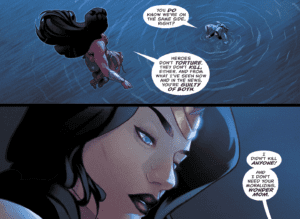 Benjamin Percy constructs a great relationship between Diana and Oliver in this issue. Unlike Barry or other members of the League, Diana has a way of getting to the heart of a matter. After a brief conversation under the influence of her lasso, she and Oliver face the threat of the Ninth Circle as partners. With the country’s capital as his backdrop, Percy leans even more heavily into a political message. This time, it is a somewhat optimistic one… well, kind of. In what could either be a simple nod to his mayoral storyline or a hint at what’s to come, Oliver rallies a crowd while simultaneously saving a senator from a terrorist threat. It’s an impressive sequence, beautifully drawn by Jamal Campbell. 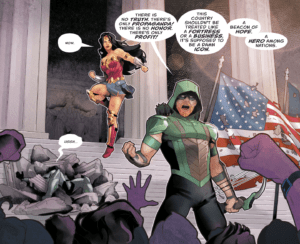 Unfortunately, the Ninth Circle always appears one step ahead of the Green Arrow, because they’re manipulating all sides. They wanted to use the senator to set an example—to stir up more dissent and fear. While Oliver and Diana do foil their demonstration, the superheroes aren’t able to keep the (corrupt) Senator safe in the end.

We also get another brief look at Dinah and Emi as they inch one step closer to the Auctioneer, but no Kate Spencer this time around. Even though the two are apart, I love that Percy and Campbell make it clear that Dinah and Oliver are still on the other’s mind. Hopefully it isn’t long before Team Arrow is reunited, but first Oliver has one more stop. Green Arrow isn’t the only DC character with a history of running for office, so of course there’s just one man who could be sitting at the top of the supervillain hierarchy…. With Lex Luthor involved, it looks like Superman might be next on the list for a Green Arrow team-up.