One thing I am not here for is a potential love triangle between Black Canary, Green Arrow and this reporter whose name I never remember (it’s apparently Victoria). Luckily, I don’t think that’s going to happen. While Victoria has been incredibly helpful to Oliver, in this issue I think she mostly serves to show the readers that Dinah and Oliver haven’t broken up after their argument (at least not yet). 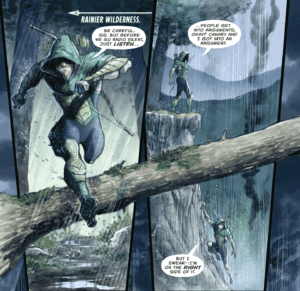 An argument that Oliver was totally on the right side of, by the way! According to him. As I mentioned in the last review, I didn’t come away taking a side. But I like that Oliver insisted it’s normal for people to argue. It’s better than trying to manufacture drama for drama’s sake, and it prevents their relationship from taking up too much of the main plot. Dinah is off digging through the Queen family history with Victoria, while Oliver returns to find that Henry has been attacked….

As the city continues to break down, so does Oliver. Once again, it’s another character trait that might make this Oliver Queen feel more familiar to viewers of Arrow. A strong connection to their respective cities seems to be the thing they have most in common. Well, that and badass, bow-wielding half-sisters.

Emi and Roy take up a good chunk of the issue’s action, tracking down Cheshire. Even when I don’t think the horsemen can sink any lower in their attempts to cripple Seattle, Percy proves me wrong. Roy comes to help Emi just as his ex is about to poison the city’s water supply. Having Arsenal and Red Arrow team up makes sense: they each show the differences between Oliver as a mentor at different stages of his career, and signify how he has and hasn’t grown. I hope that’s explored more as the arc wraps up. 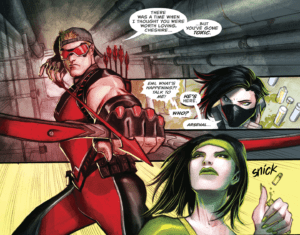 Something felt off about some of the art in this issue, especially when it came to Dinah and Victoria. However, Juan Ferreyra never disappoints when it comes to panels and colors. The blur through Henry’s eyes when he was without his glasses was a nice touch. The colors that Ferreyra is so adept at blend perfectly with this effect. And once again, the layout elevates the action of the climax. The final page of this issue may go down as one of my absolute favorites of anything Ferreyra has done. The build up and the execution have to be seen to be fully appreciated.