Gotham Academy has been a lot of fun. I was happy to see it sticking around after Rebirth began. But it seems the time has come to begin our goodbyes to the Detective Club. But first, the kids need to rescue Olive!

Since Second Semester started, Olive’s growing powers have been at the forefront of the story. The spirit of Amity Arkham has been slowly corrupting her youngest descendant for the past several issues, and the last ended with her seemingly in total control of Olive. No one is more devastated by this than Maps. The little wannabe Robin will be one of the characters I miss the most when Academy wraps up. She has been such an earnest, enthusiastic delight. I have no doubt that Maps will be the one to save the day when the dust settles. It’s hard to see her so desperate, but one of this book’s greatest strengths has been showing the friendship between Olive and Maps.

The same cannot really be said for 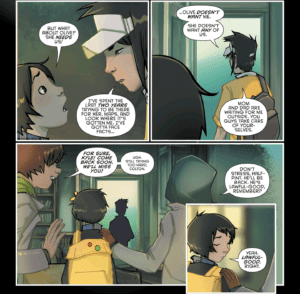 her brother, Kyle. While he’s always been there, Olive’s ex-boyfriend hasn’t really stood out among the other members of Detective Club. He always felt like a tagalong—there to make sure his sister and ex stay relatively safe. Now that Olive’s gone missing, and has been shown to be incredibly dangerous, it makes sense that Kyle would try to deter his friends from going after her. That’s mostly been his sole job over the years. So, while it does make sense that he would split off from Detective Club, I don’t think anyone really believed for a second that he was abandoning his friends.

It’s appropriate that Amity ultimately teams up with Two-Face in her quest for revenge against Gotham. They are a perfect match, considering the real Olive makes some brief appearances between fires. She’s still in there, so there’s still hope for her and Maps to be reunited. For an arc called “The Ballad of Olive Silverlock”, however, this first issue has surprisingly little. Most of the issue is taken up by Maps, Pomeline and Colton. 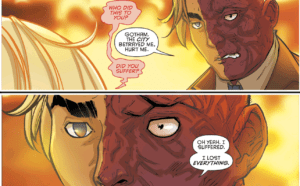 My main concern with this issue is that it will be hard to wrap the story up in the time there is left, especially since the quest to save Olive starts with Detective Club uncovering yet another secret society within Gotham Academy. Is there really time to solve this mystery and Olive’s identity crisis? No doubt the two will be linked together somehow, but it does seem strange to only be introducing this plot point so close to the end.

There’s been a lot of groundwork laid for this final, climactic story-line. I hope the team has enough time to bring it all together and send Gotham Academy out with a satisfying bang.