Let me start this off by saying I am not into building games. Minecraft and LEGO Worlds are games I simply have trouble getting into. But there is just something about the Dragon Quest Builders series that hooks me. I played the demo for the original at the recommendation of a friend and I have never regretted it. Now, Nintendo was nice enough to send us a review copy of Dragon Quest Builders 2. After about a month and 40 plus hours I cannot wait to share my findings with you. Let’s dive right in.

The story is absolutely charming. And the way Square Enix sets up the story is great as well. You start as an apprentice builder trapped on a ship. The Children of Hargon, the baddies of the story, somehow still have influence after the death of Hargon. With a grin on your face you help the crew with a few odds and ends, until a loud bang occurs. You rush to find a large hole in the ship, and before you can fix everything you are swept away.

This is where you wake up on the Isle of Awakening and find a friend. While many already know this character from Dragon Quest, Malroth has no memories when you meet him. He likes breaking things and while he wants to build, he cannot figure it out. He leaves that to you, and moving further inland you meet Lulu. She’s a bit bossy, but as the story continues… Well, she stays bossy. Together you all meet a hermit and find he wants you to rebuild the island to it’s former glory. Your story is just about to truly begin. 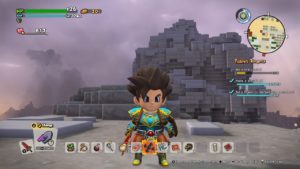 The main story rests right in the background, which is fine. It is there, reminding you of what you are supposed to do, but not in your face. That part belongs to the dialogue, of which there is way too much. It is campy, which is delightful, but I found myself skipping full sections quite regularly.

So, to build the Isle of Awakening into a paradise you must travel to several other islands to find people to help. They need to have specific skills if anything is going to improve. With that in mind you set off to what turns out to be three different islands. As I visited each one, I found many charming characters to bring back home to help in the rebuild. While I won’t go into detail in the interest of time, each of the townsfolk has a delightful story so take your time with them.

The first island (my favorite), Furrowfield, is based on farming. The Children of Hargon do not like anything that encourages creation, so they pollute the environment and nothing grows. When you land on Furrowfield you meet Rosie, an apprentice farmer who needs help. Spoilspores are ruining the ground so nothing can grow, and she needs you in order to find a way to bring farming back to the island. 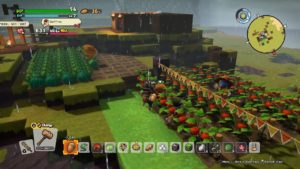 An interesting part of each story is that people do not immediately trust you. As you meet different characters they at first side with the Children of Hargon’s teachings, with the caveat of your initial friend usually. As you rebuild their island it brings not only more people into your village. Better still former NPCs embrace building, which plays into the endgame of each island.

From Furrowfield we move to Khrumbul-Dun. This is a mining island, and Babs is the daughter of a former pub owner who wants to rebuild. As you did before, it’s up to your power of building to revive a once desolate island. You enlist the help of a golem who requires you to mine plenty of precious metal to make him more powerful. Only then will you be able to defeat the monster that lies below the surface.

This is one constant in each of these locations. While Furrowfield did not have an instant villain, there was one as you progressed. With Khrumbul-Dun you find out about the bad guy much earlier. And when we move on to the next location it will be a bit different still. 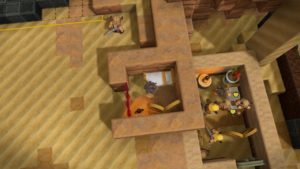 Lastly we make our way to Moonbrooke. After a break in the story where you get captured, the Isle Of Awakening needs warriors. You meet Warwick and the king and must help them in building defenses if they want to survive. This story is definitely the oddest with betrayal laced within. I was a bit confused with the way some of the dialogue was worded although in the final part of the game it made more sense.

Each time you finish one of these stories you return to the Island of Awakening and bring friends along. They are there to help populate the island as well as assist you in building it. They each get their own region which you build to complement their skills. Once the last bit of your island is complete, you reach the final part of the story.

I do not want to spoil much here, but if you have played Dragon Quest at all, you know who Malroth is. He has been helping you this whole time, only for Hargon to reappear with a huge story twist. In short, Malroth is taken to reawaken the Lord of Destruction within him. You must follow in order to save your friend, as well as the world. Their friendship is a major story point of the game, and I love it. It’s a pure one, and it really breaks you up when the game intentionally breaks it apart. 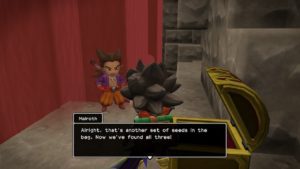 This leads into another twist I do not want to spoil for you. You dive into Malhalla, a place built for the Children of Hargon and a “practice space” for the Lord of Destruction. Once this location is destroyed, Malroth will move to obliterating the entire universe. While you may be tired from the grind by this point, this part of the game is one of my favorites.

Here is the star of the game, the gameplay loop. It is so fun to build things in Dragon Quest. As I mention before, I do not enjoy building games much. But with Dragon Quest Builders 2, There is a point to everything you do if you follow the story. To progress you take on quests from the townsfolk. In return, you will learn how to build more things and receive material with which to build them. Most of these quests will involve building, and thankfully characters will usually give you a rough guideline of what they need.

Blueprints are an amazing thing that return from the original game. Once again, not much of a builder, so when a game tells me exactly what to do I have a better time. Blueprints appear on the ground when your character has an idea and needs to construct something for someone. From here you can hit minus on your controller to see just what you may need as well as the placement for each item. 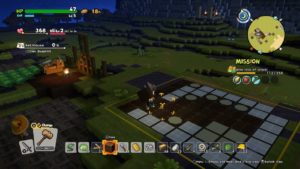 Something that did not happen in the original game was characters assisting you. In this release the townspeople will eventually come around to building and want to help you. Thankfully you mostly just have to get materials for them and find a special material or two. Once they have constructed the main part, it’s up to you to simply place the final piece. This works almost perfectly, with the citizens saying in bubbles if they need a material you may have forgotten.

Malroth is another addition to this game that works well. While the combat is super basic, Malroth helps in fighting away at enemies to enable you to focus on building or gathering. If you are not in combat, he will even assist in breaking things to help you pick up a certain material. As you play through the game you love his companionship, both in the story and gameplay.

The gameplay is simply put, why you are playing Dragon Quest Builders 2. The story can get kind of grindy, and when that happens you need an addictive loop to keep the player engaged. This game does that wonderfully. 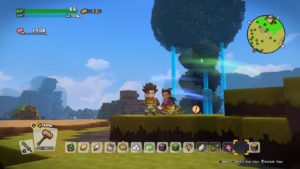 This section definitely will not take as long. The graphics are not anything photo realistic, and if you played the first game this one will be largely recognizable. But the point is, it works. Dragon Quest Builders 2 utilizes the cuteness of its world and the animation style of the main series to bring us something that fits what it is.

The soundtrack is similarly simple. I love the 16 bit style music, it’s another thing that works perfectly with the style of the game. It stays mostly in the background, but it always sets the stage for what area you are in.

Dragon Quest Builders 2 is in my opinion, a fantastic combination of role-playing game and sandbox construction game. Those who don’t want to just endlessly build with no specific purpose will be pleased. I love the gameplay loop, and the characters are charming. My biggest complaint would be how long the game is, and that only in how the story would be better if shorter. Besides that easily dismissible issue, Dragon Quest Builders 2 should be in your collection.