Spoilers ahead for Darth Vader #2 along with Star Wars: The Clone Wars.

If you have seen the great animated series Star Wars: The Clone Wars, then you know a little about how Order 66 really came about. A chip planted in the clones at birth would cause them to hunt down and kill any Jedi they saw when the order was activated. So, it wasn’t their fault that they turned on their superiors and sometimes even their friends. Still, it’s kind of heartbreaking to watch the opening of this issue as a set of clones talk about how they killed all the Jedi while they play with lightsabers.

aftermath of the Clone Wars, and here we see a few clones beginning to come to the realization that they probably aren’t needed anymore. Their brothers are no longer being produced back on Kamino, and they’ve been sent on this “waste” of a mission. With the Empire around, Palpatine doesn’t want to waste any more money on engineering soldiers when he has expendable subjects to do the job.

I focus a lot on the clones because more than half of the issue involves them. As Darth Vader arrives, they’re afraid they’ve run into a Jedi come for revenge. I’m certain that part of that’s true. Anakin participated in Order 66, and went into it convinced that the Jedi were evil and needed to be killed, but as the entire Star Wars series has taught us: there’s still some good in him, it’s just buried deep under anger and grief. So, I do believe that part of Vader’s slaughter of the clones on Brighthome is a twisted revenge. Why else would he refuse to transmit his authorization codes unless he wanted an excuse to fight?

I love the moment where Vader drops the green lightsaber to the ground and walks away. Every panel in this issue is well-paced, but that moment stands out.

It’s also incredibly cool to see Vader using the force to prevent a grenade from exploding. This moment harkens back to another scene from The Clone Wars where Anakin attempts a similar feat with a much more powerful explosion and nearly dies as a result. Here, he boasts that he’s no longer a Jedi and “has no limits”. If Anakin Skywalker, a Jedi, could almost hold back an enormous explosion, then surely Darth Vader, Sith Lord, can contain the power of a measly grenade. Except it’s made very clear that his supposedly limitless power isn’t as strong as it used to be. I wonder if this is the moment Vader realizes that, while Palpatine did save his life, his new Master also made sure he was weaker than before. 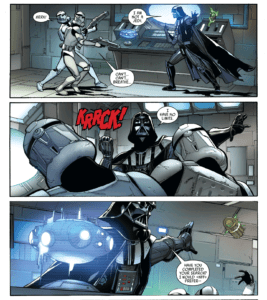 After searching Brighthome, Vader now has a true destination: a surviving Jedi to fight, and lightsaber to steal. But without a weapon of his own, and up against what looks like a powerful, battle-hardened Jedi, this battle should be a lot more interesting than the two we’ve witnessed so far.