Spoilers for Darth Vader #1 ahead.

When a new Darth Vader series was announced, I was a little confused. Mostly because it has the same name as the first, but is set in a completely different period—casual observers might also be confused when they see the new #1 pop up. Unlike the first series which takes place alongside the main Star Wars comic (between the fourth and fifth episodes), this takes place immediately after Revenge of the Sith. It is the story about how Darth Vader forges his red lightsaber, but what I find most interesting about it is that it’s looking like it will bridge the gap in character development between Anakin and Vader.

Yes, what Anakin does at the end of Revenge of the Sith is horrendous and unforgivable, but the character we see in the prequels still feels a long way off from the Sith Lord we meet in the original trilogy, Rebels and especially (and most recently) Rogue One. The comic starts by taking the controversial scene from the end of Episode III and improves upon it. Anakin fights back against Palpatine, devastated that everything he did to save his wife was for nothing. But he still chooses to live on. We aren’t given a reason, and I wonder if that’s a question Charles Soule will try to answer in this series. 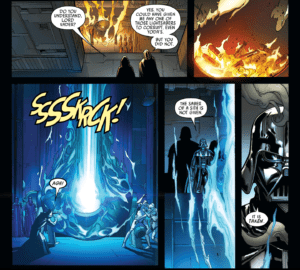 We also learn a lot more about lightsabers in general, and what happened to all the lightsabers that belonged to fallen Jedi after Order 66. It makes sense that all of them were disposed of, but I suspect the kyber crystals that powered them were salvaged—we know from Rogue One that the crystals are essential to the Death Star.

Most of this issue serves as a setup for Vader going on a journey to find a kyber crystal or lightsaber to take and corrupt into a red saber. The unsuspecting smugglers that he finds in the desert are an appropriate group for Darth Vader’s first act: just before he arrives, they are about to mention that they are slavers as well. Now Vader has a ship, and a mission. 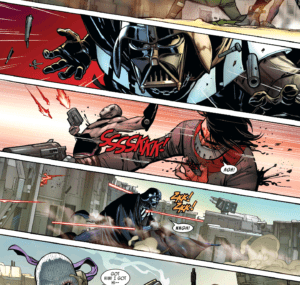 There’s also a mini story at the end that’s pretty cute… which is really weird to say because a lot of people die. But there’s a cute droid! That… also dies. It’s weird, but pretty funny.