Spoilers ahead for Batman #24.

The ending for his issue was spoiled before it was even 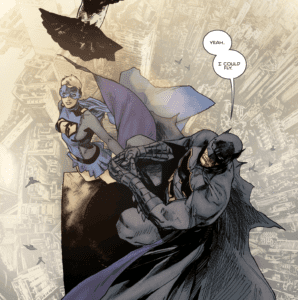 released. If you made it this long without seeing how it ends, stop right now and go read it! This issue is a standalone masterpiece. I purposefully do not assign scores or “go read it/don’t read this” declarations in these articles, but this is an exception: 10/10, A+, go read this issue! Tom King has such a deep understanding of Bruce Wayne and what I can tell is a fierce commitment to the character and moving him forward. The ending, if you know it, is great, but it’s how King puts Batman on that rooftop that matters.

The bulk of the issue—everything but the last few pages, actually—is a conversation between Batman and Gotham Girl on top of a tower in Gotham City. As the two discuss what Claire’s future holds for her. As their conversation folds out over “Today”, we see Batman following Catwoman during “Tonight.”

Claire wants to know what she should do next, and she wants Bruce to tell her. If Claire becomes a superhero and uses her powers, those powers will eventually kill her. She probes Bruce for ideas, slowly getting under his skin as their talk continues. She asks him why he doesn’t find a way to get powers of his own, or why he is a hero at all.

He does it because he is trying to find happiness. And time and again, he fails. The Flashpoint version of Thomas Wayne told him not to be Batman to avenge his parents, but it’s more complicated than that. Batman may have started as a way for Bruce to find justice, but now it’s how he tries to find happiness. He needs this, he needs to keep trying to be happy. 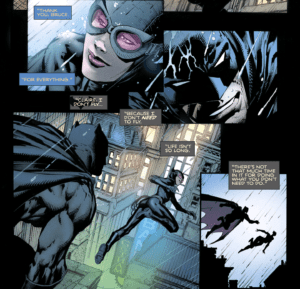 I love how Claire turns his line of thinking back on him. If life is about doing what you need, then what does Bruce really need? Is it a family, or a villain to chase? I guess it’s a little bit of both.

Which brings us to the end of the perfectly illustrated issue. I like that the artists were divided up between the “Today” and “Tonight” segments of the issue, with Jordie Bellaire’s colors tying them both together. Danny Miki drew the day portion, with harsh hatched shadows and capes billowing in the wind. “Tonight” is drawn and inked by Clay and Seth Mann. These two had the unenviable job of making the pivotal moment—where Bruce Wayne admits what he really needs and gets down on one knee in front of Selina Kyle—and they absolutely nail it.

The final moment is sweet and heartwarming on its own, but the build-up makes it even better. I loved this issue front to back, so much that I don’t even care that we still have to wait for Selina’s answer!