This article contains spoilers for the end of the issue. Proceed with caution.

Another gorgeous issue drawn by Jason Fabok opens with a different Batman narrating the story. Thomas Wayne, who appeared at the end of last week’s Flash and who, as he himself points out, shouldn’t exist. This was certainly the most interesting mystery of “The Button” arc so far. Inexplicably, the Flashpoint universe has continued, even though that shouldn’t be possible.

Alternate universes are a dime a dozen, especially in comic books. Destroying them is often seen as just the cost of “setting things right” again. Thomas expected to die when Barry undid Flashpoint, and there’s something very interesting about how he knows and accepts that his entire existence is fake.

The meeting between father and son was every 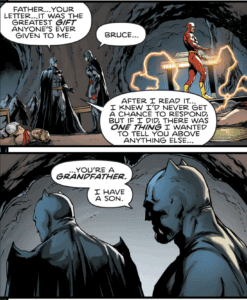 thing I hoped it would be: somber, heart-wrenching, and action-packed as they fought side-by-side. Although I knew there was no way Williamson and King would bring Thomas back to the “real world”, I was hoping they might subvert my expectation. I would have loved to see them try to fit Thomas into the main DC universe, if only for a short time. It’s clear that this brief trip to Flashpoint was just meant to mess Bruce’s head, and it was sad that we couldn’t spend more time with Thomas before he was taken away (seemingly for good) but it was worth it just to finally give Bruce the chance to tell his father about Damian.

One thing that did bother me was when Barry said it has only “been months since the timeline was repaired”. Even taking the ever-changing timeline of comics into account, the idea that the entire New 52 would fit into just a few months left me perplexed. Unless Barry’s comment about the timeline refers to Wally West’s return? I know it’s just a small moment, and I shouldn’t waste my time getting caught up in the details, but it stood out. 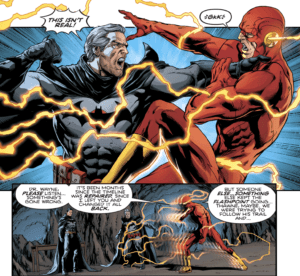 I don’t believe for a second that this story will end with Batman finally hanging up his cowl, but if there was anyone who could convince him to do so, it would be his father. But I suspect he won’t even consider it this time. Bruce may have started his journey because of his parents, but just like Barry: it isn’t the only reason he has kept going. It’s another similarity that helps make the two heroes a great team.

There’s one issue left in this storyline, and I have no idea how it will manage to answer all the questions I still have. The most pressing one being: why would Dr. Manhattan (assuming he is indeed behind all of this) want to hurt Bruce this way? Showing him his father, only to rip the opportunity away, was cruel and sadistic. And now it seems Manhattan is leading Barry and Bruce straight to him… wherever that might be. Will we finally know why he manipulated the DC universe this way? There’s a lot riding on the next issue of Flash. I hope it can deliver.