To start, this issue was much less frustrating than the last one. I still think the setup of having Dinah Lance—a minor celebrity—going undercover and not being recognized a bit hard to overlook, but hey: this issue has all the Birds working together, and then some! I enjoyed the addition of Nightwing and Green Arrow in the hunt for Blackbird, and the art was also much improved in this issue. Overall I am still enjoying the book, mostly because despite questionable plot developments, it still manages to feel like the characters I love. Most of the time.

Barbara is the only one who recognizes that the first Dinah the team comes across is just Blackbird in disguise. Mostly because Blackbird just isn’t careful, but it’s also clear that Barbara simply knows her best. Even better than Oliver. There’s a lot of focus on relationships, with both Green Arrow and Batgirl tasked with using their “psychic bond” with Black Canary to help shake her from Blackbird’s control. Yes, the power of friendship and teamwork comes through to save the day!

Now that’s not a bad thing. I personally get a kick 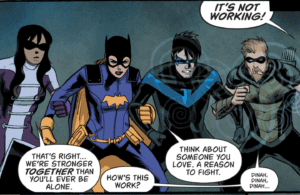 out of those kinds of stories most of the time, if done well. And it does help emphasize that Huntress has made herself more at home on the team. She’s no longer a third wheel to Dinah and Barbara’s longstanding friendship, she’s part of their family too. Though I do wish she had found a less cliché way to say it.

I was also happy that they acknowledged Helena’s super-spy past, having avoided it last issue when it would have been incredibly useful. She still has her hypnos implant after all, and gets it reactivated for just the one night (although I can’t imagine it won’t be reactivated in the future if it needs to be). Helena proves critical to shutting down Blackbird’s operation with the help of her implant.

While the fight’s going on, though, we get to see a bit more of Gus and what he’s really up to. The mystery of Gus’s anonymous benefactor has been in the background of every issue since his debut. With Blackbird’s arc wrapped up, it looks like we’ll finally be getting the answers to who he is, and what his benefactor has planned for the Birds. Since we don’t know much about him outside of his obsessive Batgirl collection, I don’t have much attachment to him yet. I’m sure that could change once his backstory is revealed, but we’ll just have to wait and see.