All-New Wolverine has been a wonderful book so far, in part because of Gabby. When the mini-Laura was introduced, I didn’t expect her or her sisters to stick around more than a few issues. But now that she’s been by Laura’s side through thick and thin, I don’t want to imagine All-New Wolverine without her in it. Or Jonathan. The two of them continue to bring out a different side of Laura Kinney. I am worried that Marvel’s shift towards Marvel Legacy could result in Gabby’s dire circumstances at the end of this issue leading to a permanent end for Laura’s sister/clone. 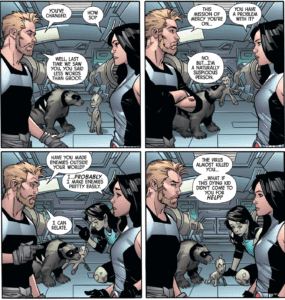 Now, this book is about Laura Kinney and I love Laura, but… Gabby really steals the show, which is true most of the time. It has a lot to do with the fact that she acts as excited about everything. Everything is new and exciting to her, contrasting with Laura’s closed-off and cynical view. Even when she’s not the center of attention, she’s there in the background with Jonathan, playing while the adults do the serious talking. It’s cliché to say, perhaps, but she really is a light in Laura’s life. She gives Laura someone to care about and protect. 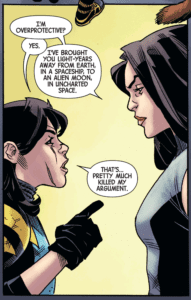 That’s why I’m doubly worried about what might happen if she’s not okay at the end of this. This isn’t the first time Laura thought she lost her sister, and the last time wasn’t pretty. Although Laura has gone on this mission with the Guardians of the Galaxy to help these aliens, if the Brood really do take Jonathan and Gabby away, there’s going to be hell to pay.

We learn nothing new about the virus or its origins apart from a location in deep space. This issue is mostly just an intermission between the end of one arc and the start of another. It gives more Marvel characters the chance to see the new Wolverine and react to how she’s changed—this time, in space. One thing that struck me the most was how Laura didn’t even try to stop Gabby from going with her this time. I liked that they addressed that when Gabby was calling her overprotective. This issue was all about cute, silly moments like that, leading up to the eventual cliffhanger and potential heartbreak.

I thought Tom Taylor was giving Laura and company a nice breather here, leading her on a silly trip through space with her pet wolverine, but this issue might hail some big changes Laura and her sister.