“Hi, I’m Troy McClure. You may remember me from such educational films as “Two Minus Three Equals Negative Fun” and “Firecrackers: The Silent Killer”. We will forever remember the voice of (Phil Hartman) as his infamous Troy McClure from The Simpson’s. On September 24th, 2017 Phil Hartman would have celebrated his 69th birthday.

Phil Hartman was one of the funniest men in comedy. He started as a voice-over actor for many animated cartoons. His career really took off when he became one of the kings of ‘Saturday Night Live’ which he had the best Frank Sinatra, Phil Donahue and Bill Clinton impressions to ever grace the SNL stage. Hartman also starred in many sitcoms and on the big screen in films like ‘Coneheads’, ‘Jingle All the Way’, ‘Sgt. Bilko’ and ‘So I Married an Axe Murderer’. 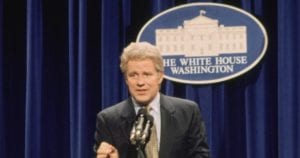 The comedy world darkened on the evening of May 27th, 1998 when we lost the great Phil Hartman. Happy Birthday Phil Hartman and yes, we will always remember you from such movies ‘Three Amigos!’ and ‘Jumping Jack Flash’.