Paul Walker would have celebrated his 46th birthday on September 12th, and we wanted to spread a little bit of him out into the world today.
I was first introduced to Paul Walker’s films when I was fourteen years old. After all, a part of most teenage years is seeing movies. Though I must admit the first film I saw of Walker’s was via the Disney Channel’s “Meet the Deedles” as opposed to film in theaters. In many ways, I wish I was as into browsing an actor’s filmography on IMDB when I was teen because of him. This was never the case for me so I continued to stumble upon Walker’s films.  I did continue stumbling upon him in films though because he happened to be starring alongside some of my favorite actors at the time.  Little did I know he would slowly become one of my favorite actors as well. After every movie and every new character, I realized Paul Walker was a hard actor to ignore. His portrayals were always amazing despite the fact he might not be playing the most likable character. Regardless of the role, Walker left an impression.

She’s All That presents one of Walker’s least likable characters. Dean Sampson is the guy who made high school unbearable. All he cared about was his popularity. Even the friendships he formed with Zack Siler became a competition. A competition that ultimately providing a modern retelling of My Fair Lady. Dean momentarily gave us pause when humiliating Lanny Boggs publicly by telling her about their bet. The dislike of this character continued to grow as he decides that Lanny is more of a conquest than an actual person. Dean constantly objectify’s Lanny throughout the film. At no point does any viewer want Sampson to win the bet taking place. At no point do we want Lanny to give into Dean’s advances merely because she is mad at Zack. Yet somehow we all left the theater okay with Walker as a person because we realized that a man known for his giving nature could somehow sell us that Sampson was not a good person. This is the reason this performance remains one of my favorites of Walker.

The Fast and the Furious

One of my favorite movie pairings of all the time hail from The Fast and the Furious. The moment that Brian O’Conner meets Mia Toretto and their continued interactions made us all hope that Dom and Brian could get along somehow. The initial protest makes sense, but I was grateful when Dom gave into the notion that Brian was not such a bad guy after all. Yes, he was an undercover officer but Brian soon realized that Dom was not merely the street racer reported about in his file. By attempting to discover the group of hijackers his assignment focused upon, Brian realized that his destiny. The beauty of this film is how Brian’s relationship with Mia and friendship with Dom begins. Sometimes we are destined for more than we allow ourselves to believe in. Hence why Brian lets Dom leave at the end of the first film and why Dom’s last words in the last film were so potent.

I cannot imagine watching Varsity Blues and not feeling something for Lance Harbor by the end. I loved how this character developed. In a small town where football is life, we are lead to believe that Harbor’s life is over as soon as he sustains his injury and can longer play. Nothing good will come to his life now. Harbor realizes though that his life can be more than playing football. He lets everyone know in the face of adversity that we do not have to sit blindly on the sideline and accept the cards fate dealt us. Instead, by the end of the film, he is coaching the team, realizing that he can take what he is passionate about. Despite shattered dreams, by the end of the feature viewers know that Lance is not going to merely give up. He can still have football in his life, just not the way he expected. Sometimes we have to remember that just because our situation is not ideal, we are still here. We are still alive. Walker himself once took the time to remind us all that “No matter how good or bad your life is, wake up each morning and be thankful you still have one.” Lance is the personification of these words of wisdom. 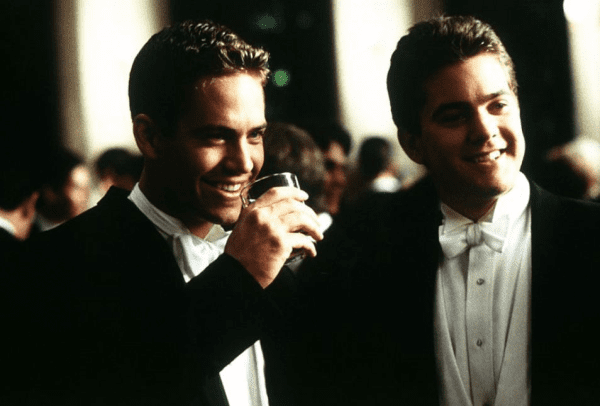 The role that made me take true notice of Walker though was his portrayal of Caleb Mandrake in The Skulls. Any time I see the film on television I find myself watching the film from that moment until the very end. The worst part of the entire feature is discovering how manipulated Mandrake is by his own father. Sometimes we need reminders from others who have more faith in ourselves than we do that we are not the horrible person others might make us out to be. Many of Walker’s scenes are worthy of praise in The Skulls, however, the ending seems the most fitting. Instead of a guy who listens to his father’s orders, he grows into a man of his own and does the opposite of what everyone expects. Mandrake starts believing in himself. He proves that sometimes going against the grain is superior to complacency. Many times in life we lose sight of our future thanks to our past. I imagine that Walker’s words “The journey is more important to me now. There’s no guarantee, no matter what. We get one run in life,” would hit home for Mandrake by the end of the feature.

I remember going to see Joy Ride in theaters. It was my one of my best friend’s birthdays and we both loved Walker so seeing the film was a no brainer for us. We were then introduced to Lewis Thomas and his brother Fuller making a huge mistake before they picked up Venna. Although the two brothers make the mistake of talking to Rusty Nail, we feel for these characters by the end. Does their harmless prank warrant the insanity that Rusty Nail makes them endure? I would say no, but primarily because of the scene in the hospital with the innocent victim of the night’s events. Ultimately we want them to escape Rusty Nail’s grasp and we want to know that everything will be alright. I wish we could have received a sequel we deserved in this horror franchise with both the brothers and Venna. A story of true redemption among the three, while thrilling us at the same and Walker invoking the fear he felt into us.

Paul Walker left a place in all our hearts. While it is hard to believe he is no longer with us, he left us all with lots of memories. His words remind us that we can do better. He continues to make us laugh. He continues to make us smile and I’m a firm believer that a simple smile can make or break someone’s day. Thankfully, even in our darkest of days, Walker’s smile is one that we will never forget.

“You know, all that really matters is that the people you love

are happy and healthy. Everything else is just sprinkles on the sundae.“