Red Faction Guerrilla ReMARStered exists for only one reason – to give the player a sandbox in which they can destroy absolutely everything. The sheer joy that comes from the extreme chaos you create during nearly every moment of this game is more than enough to make up for Red Faction Guerrilla’s shortcomings. 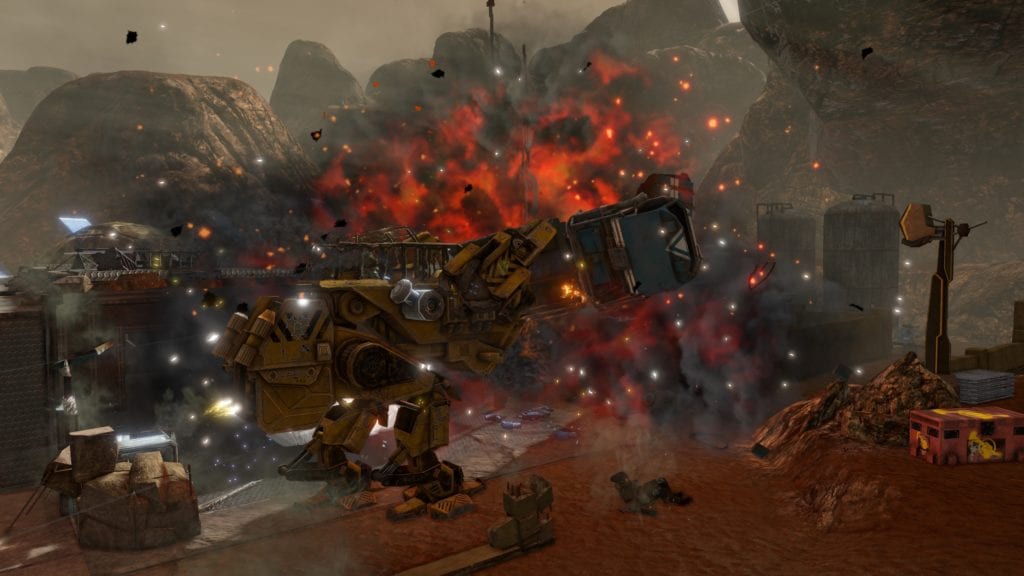 Alex Mason, a down on his luck man who decides to travel to Mars in search of honest labor, arrives only to immediately be swept up in an attack by the Earth Defense Force (EDF) who are determined to kill his brother Dan. Successful, the EDF decide they must kill Mason. Mason fights back, eventually gaining the upper hand thanks to a few Red Faction members who arrive just in time. Angry at the loss of his brother, Mason decides to join Red Faction.

Red Faction is a resistance movement created by various Mars colonists tired of EDF’s brutal policies and martial law. Determined to free Mars, they fight daily against the EDF in hopes of bringing back the peace that was originally promised upon colonization.

EDF is not Red Faction’s only threat, as the Marauders and HYDRA both aim to make Red Faction members, and Mars colonists, lives a daily struggle. The Marauders are essentially a vigilante band of warriors living in the outreaches of Mars while HYDRA is the eye in the sky, shouting orders to the EDF with little regard for the chaos they cause on land.

As Mason, you must fight against the EDF and eventually, HYDRA to free life on Mars. That short summary is essentially the whole story – sure, there are a couple of named characters, but for the most part the story consists of destroy, go to next target, destroy, repeat.  That’s all we need, and the developers knew it, so they didn’t bother to bog the gameplay down with a needlessly convoluted story and I applaud them for that. 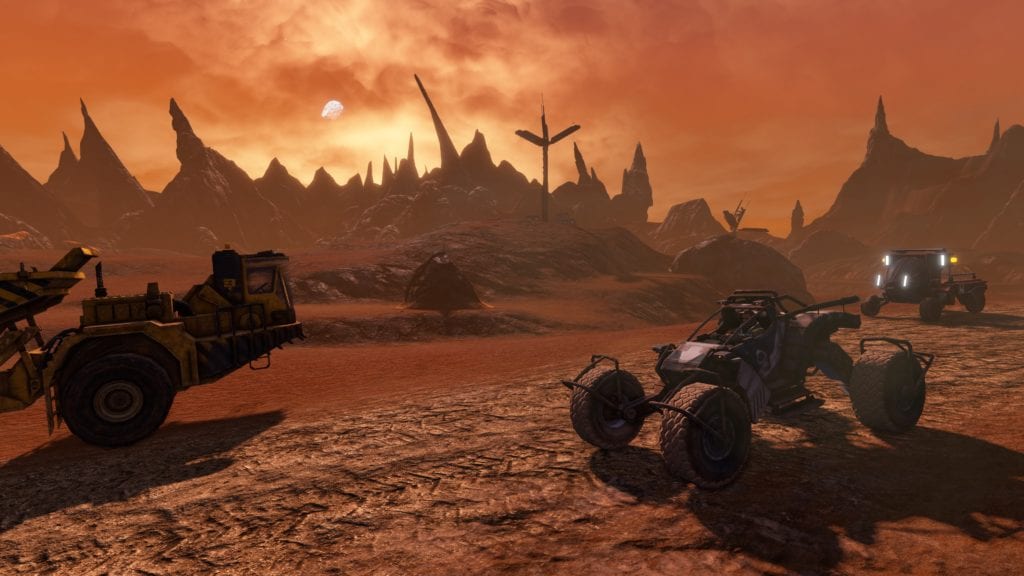 Red Faction Guerrilla works solely because of its gameplay. You don’t care about the characters, you don’t care about the colonists, you don’t care about the EDF – you play simply to destroy. THQ Nordic has essentially created a mix somewhere between Just Cause and Grand Theft Auto V, as you have nearly unlimited resources for the sole purpose of destroying absolutely everything around you, while you run around a sandbox world, and physics don’t matter one bit. Cars drive like they are possessed, throwing their selves off mountains with a simple tap of the gas, while buildings can be brought down with a sledgehammer, burying everything inside. The sheer level of destruction is amazing, and I had so much fun destroying everything in sight that I rarely stopped to think about why I was doing any of it.

There are six populated sectors on Mars, and throughout Red Faction Guerrilla your goal is to liberate all six and reclaim Mars for the colonists. To do this you must first lower EDF’s control of a particular sector to zero – this can be accomplished by destroying important landmarks and tackling various side quests. You can avoid the side quests all together if you want, but your time with the game will flow better and have better gameplay variety if you allow yourself to tackle at least a few. Most missions revolve around either joining various Red Faction members to destroy an EDF compound or stealing vehicles and returning them to your safe house. 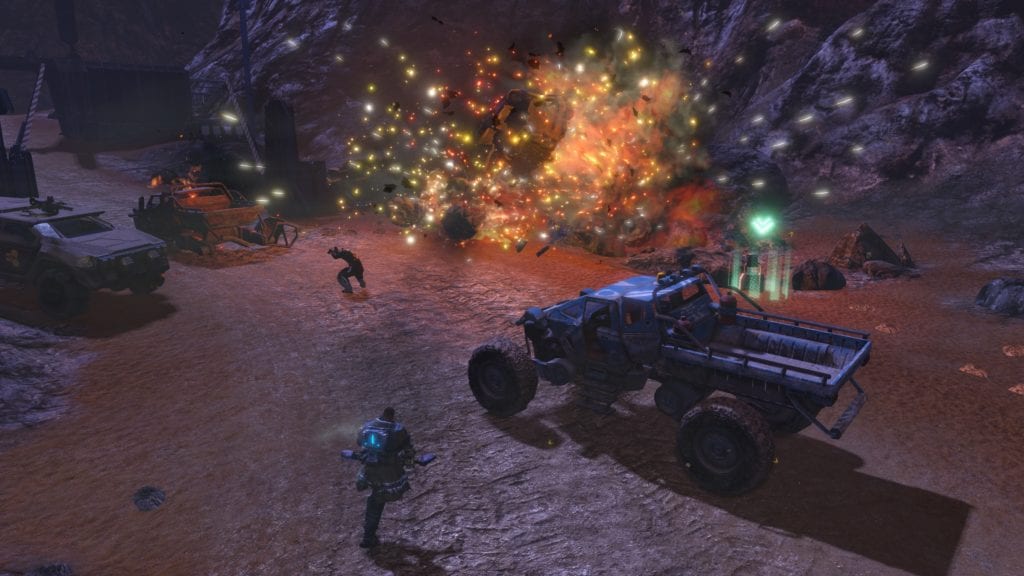 Your safe house serves as your central hub and thankfully there are quite a few scattered throughout each sector of Mars. At safe houses you are able to upgrade weapons and special abilities using salvage, which you collect from the destruction you cause, and switch out your weapons. You begin with remote charges, a pistol, an assault rifle, and a sledgehammer and – although there are more weapons in the game – I found myself sticking with this set up throughout most of my playthrough aside from switching my pistol out for a late game weapon which could cause more damage with one bullet then any of my remote charges could.

As you regain control of a sector various storyline missions will become available. These are a bit more in-depth than the side quests and often involve other NPCs. Once you have EDF’s control down to zero in a particular area then a final mission will open after which you’ll be sent into the next area to continue your parade of destruction. 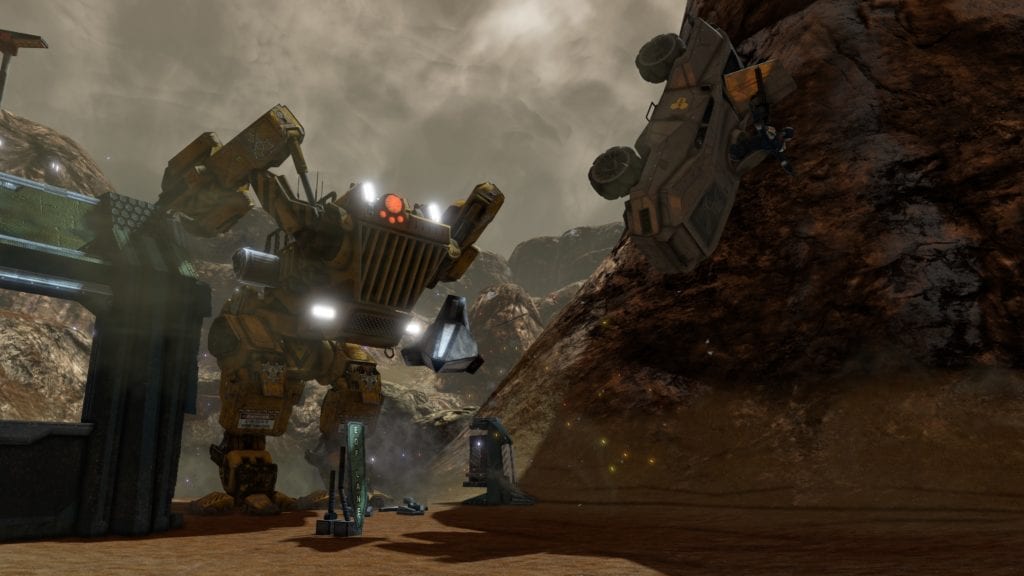 The map remains open throughout and, aside from one area; you can reach any point at any time so you do not have to play the game in a linear fashion unless you absolutely want to. Seldom will the story advancement prevent you from doing exactly what you want to do.

The goal is to destroy and rarely has a game given you so much freedom to do exactly that. I spent most of my playthrough attacking EDF forces with my sledgehammer, bringing down massive buildings as gunshots and explosions rang out around me, never for a second worrying about accomplishing some arbitrary goal other than to destroy. It was beautiful. 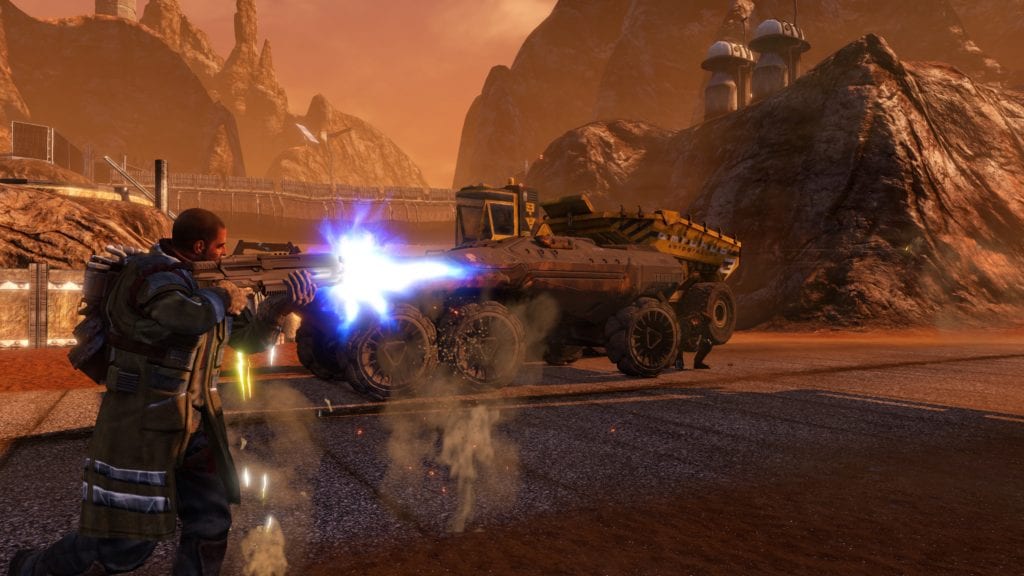 The graphics are outdated – the cut scenes are clunky and lack detail, as well as the world and its inhabitants. Mars is essentially a dusty, mountainous terrain filled with little to look at. This is partly because of the game’s age – nearly ten years – and party because you never take the time to admire anything anyway as you rush toward your next demolition. Sure, the graphics have been updated and are serviceable, I never encountered any glitches or slowdown, but there was not an effort put in to make the game compete with current gen titles and that’s fine – I’m not sure it ever wanted to. Red Faction Guerrilla accomplishes what it set out to do – provide the player with a huge world full of buildings to destroy and people to smack into oblivion – and as such it provides the graphics needed to allow that to happen without any interruption. 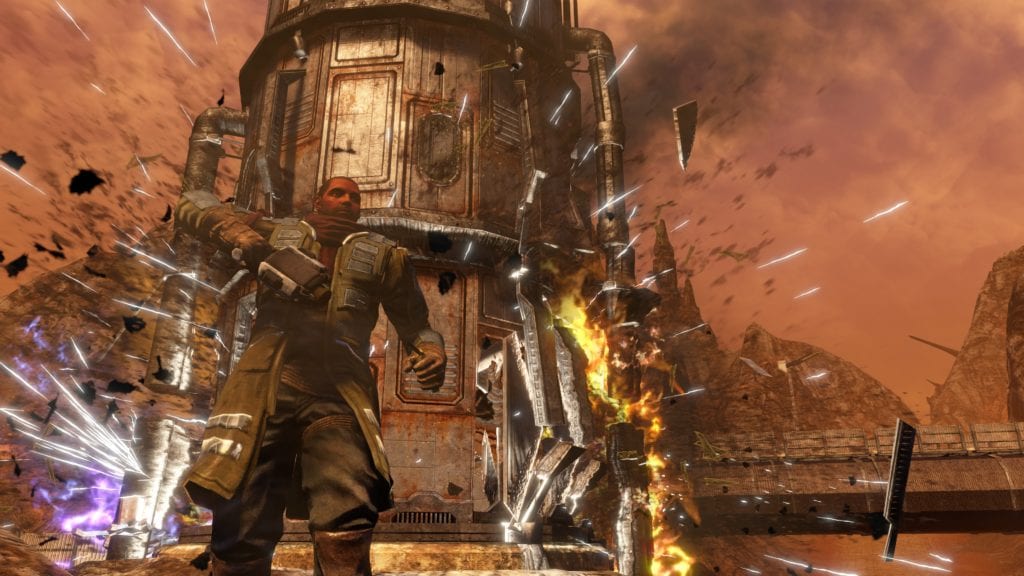 Red Faction Guerrilla takes anywhere from 10 to 15 hours to complete depending on how quickly you decide to run through the story missions and how many side quests you attempt. If you were determined to finish all quests and unlock all items, then I’d guess that the gameplay hours would be almost doubled. Thankfully the game does not overstay its welcome, knowing full well that its gameplay could grow tedious if it were stretched out for too long.

After completing the main story you are free to explore at will and finish up side tasks and continue unlocking new items, although without the story to push you forward the game does begin to lose a bit of its appeal. Still, the sandbox remains fun to roam and you can continue to find new and creative ways to bring down buildings – just minus the pressing threat of the EDF and HYDRA. 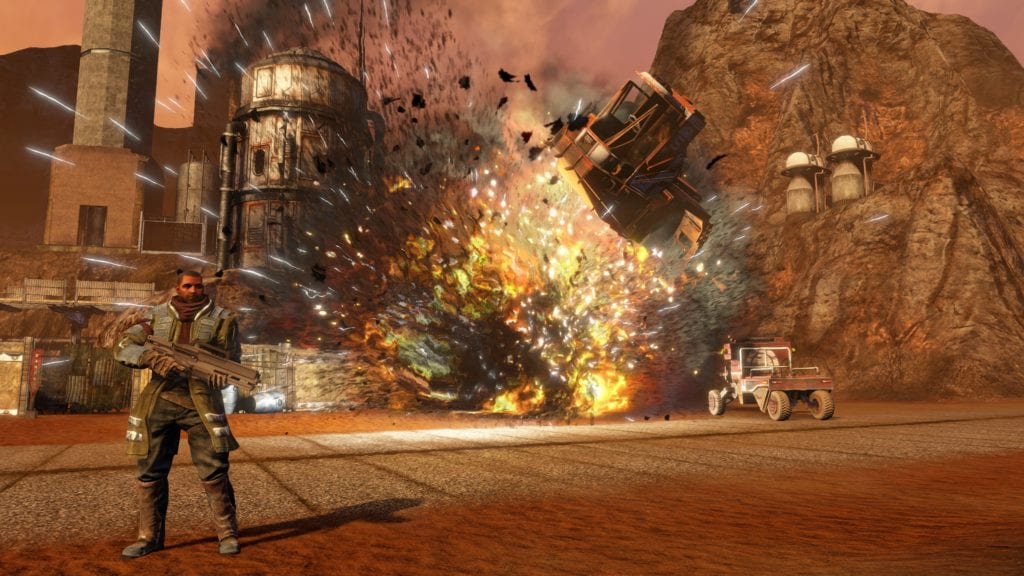 Don’t approach Red Faction Guerrilla assuming you’re going to play the next Last of Us. Don’t come for a gripping story. Don’t come for memorable characters. Come for destruction and mayhem. 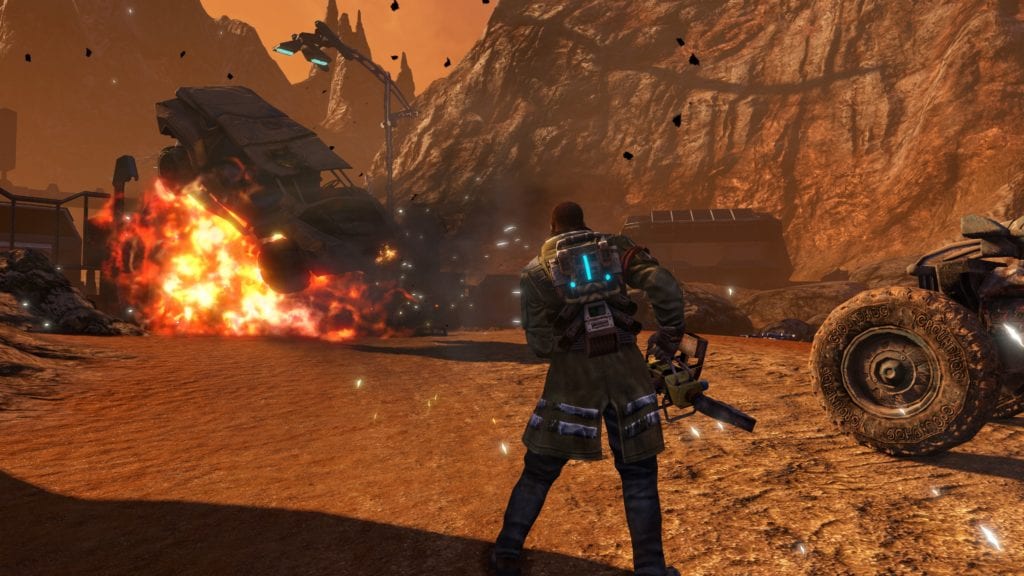 Red Faction Guerrilla ReMARStered is available now on Xbox One, PS4, Nintendo Switch, and PC. A review code for the XBOX One was provided to Fan Fest News by THQ Nordic.