Hello Geeklings, and welcome
to what I’m hoping will be a new
column for me over here at Fan Fest. I was
recently thinking how to expand

the Pull List and talk to you fine people about comics more and
then it
came to me. Just suggest
things to read. This way you guys can hopefully get
some ideas for new
reading material and I can talk about
comic books that I
love. It really is a win win situation.
#itsthelittlethings I’m thinking that
this
could be a weekly or bi-weekly segment but I guess it depends how you guys

react to it. Oh, and just so you
know, if you have suggestions for me to read
throw them in the comments. I
will definitely look into any and
all comic
suggestions and maybe even discuss them here. How
exciting!

When it came
down to
choosing this weeks suggestion it was pretty easy. I wanted to give you
guys
something worth your time
and adult dollars. Start off with a bag
of awesome and a bang. An
awesome bag that goes bang?…
Nevermind. With that
being said Geeklings our first Read. This.
Now. post belongs to Matt 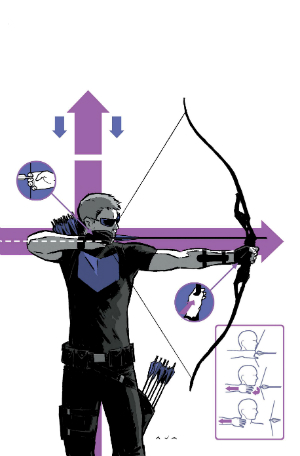 Now I know some of
you could be thinking, “Hawkeye?
The Avenger
with the bow and arrow and no super powers what so ever? Nah,
I’m good.” and
I’m here to
dissuade you from that line of thinking cause otherwise you’re
going to
miss out on something incredible.
Let’s start with the basics. I’m
not sure how many of you have read Matt
Fraction before but do yourself a
favor
and look up his books. I’ve kind of listed him in the “I’ll read
just about
anything he writes”
category and haven’t been disappointed yet. If you’re
looking for super
hero stuff outside of Hawkeye
his run
on Invincible Iron Man was really strong and
entertaining, and if
you’re looking
for something else and can handle the adult content (check your
purity at
the door) then check out Sex
Criminals. It’s a story about
two people who can stop time when they,
ummmm, orgasm and how they use
those
powers to rob banks (general summary there’s actually more to it).
This book is
not about sex
offenders so breath a sigh of relief there friends, but it is
laugh out loud
funny, has great character
development, and some how even
includes a musical montage in a comic. For
reals.

But we’re not here to talk about Sex
Criminals, we are here
to talk about Hawkeye.
Fraction takes this
non powered, arrow shooting, down on his luck
Avenger and makes him an absolute

star. I think this book works so well because Clint Barton is such a down to

earth type of hero and
always in the background of the Avengers (the comics but
I guess you could
argue the movies as well). Yes,
he’s given his time to shine
but Avenger books mostly belong to the big
names like Captain America, Iron
Man,
or Thor. Not that there’s anything wrong with that but this comic
gives Clint
an opportunity to
show why he’s so valuable to the Marvel universe.

One of the things I
loved the most about this series is
that it told one major story.
Most comics are broken down into
story
arcs that could last any where from three to seven issues, and
yes
Hawkeye has those as
well, but it all ties into one large story and
the arcs play more as
chapters and less like detours.
Essentially the long and
the short of it is Clint (Hawkeye) has a run in
with these mobsters who own an

apartment building in New York (cause all things awesome happen in New York,

duh). These mobsters (known
as the Tracksuit Draculas, which also happens to be
my favorite name for a
group of villains) are complete d-
bags to the tenants,
seriously over use the term “bro”, and even go so far
as to rough up a dog (his
name
is Lucky or Pizza Dog). All that added together forces Clint into action
and
he beats the crap out of them
(seriously bro), takes over the apartment
building as a super, and adopts
the dog. Boom,
now we
have a story! (P.S. that is all issue one)

What makes this comic
work so well is the how important character is to
Fraction. Clint clearly
represents the every man; down on
his luck, kind of
broke and beaten, looking for a break. Nothing comes easy
for him and it helps
center
him into this relatable realness that isn’t common with super heroes.
Clint
doesn’t come across as this god
like super hero which is part of the
books charm. That and it’s supporting
cast. Kate Bishop, who also is
Hawkeye,
provides a great foil for Clint. Or maybe more of a conscience,
letting him know
that he can be
so much more then what he is. That there is greatness in him.
Plus their
relationship is filled with humor,
emotion, and a ying and yang need
for each other. Yes they can operate solo
(as seen in the later parts of
the
series) but they tend to be at their best when together. Their
relationship in a
lot of ways is the
heart of the book.

perspective of Pizza Dog and it’s brilliant). If I was to liken this comic

series to anything it would
most resemble a Tarantino movie. The story isn’t
always linear, but when
you binge read it like I did, it
all comes together in
this great “holy crap” moment and you’re left wanting
to start over and
experience
it all again. Fraction spreads this story through out twenty-two
magnificent
issues (and one annual) and
weaves his tale seamlessly through the
pages. But he doesn’t do it alone.
The art work of David Aja is
mesmerizing in
it’s simplistic/gritty nature. The characters and the action
jump from the page
and come
across as a cinematic experience. Something that was enhanced by
reading the
series in a digital format, but
if you want to read physical copies
I’m sure this won’t change anything

. Also as far as art work goes
check out those covers. My
god they’re gorgeous. There are
so many of them I
just want to frame and hang around my apartment (or as I
know it, the Fortress
of
Nerditude).

Hawkeye is one of

those rare books that kind of
transcends being just a comic. I can honestly say
it’s in my top three
favorite series of all time, and with
the use of Read.
This. Now. I will slowly reveal the other two in
that list. But the main
thing
here is Hawkeye is everything that makes comic book reading
great.
There is a heart and a pulse at
it’s core that sucks you in and provides
you with a story and characters
you can sink your teeth in. Matt
Fraction takes
Hawkeye, a character that was typically a B level hero, and
not only made him
important
and relevant, but also one of the main attractions of Marvel. Putting
aside
the awards and the critical
acclaim you should
read Hawkeye because it’s everything you’re
looking for in any kind
of
story. Humor? Check. Action? Check. Detailed characters? Check. Feels? Check.

Unique story telling? Check.
Just do yourself a favor and pick this book up and
don’t look back. You can
thank me for it later.
Seriously, bro.