J.K.  Rowling’s journey to find a publisher for a little book series she had written is one of inspiration and hope for aspiring writers or anyone with an idea or a dream they believe in. It’s hard to imagine that one of the most popular literary series, and cinematic successes, to date, almost didn’t happen. In fact, Rowling was turned down by 12 different publishing houses for her Harry Potter and the Philosopher’s Stone pitch before independent publisher Bloomsbury took a leap of faith on the boy who lived and bought it.

It’s been 22 years since Rowling sent out that original synopsis and 20 years since Harry Potter and the Philosopher’s Stone was published. To honor this anniversary the British Library has had a Harry Potter: A History of Magic Exhibition available to the public filled with early book drafts from Rowling’s archives, original drawings by Jim Kay, several real-life artifacts dating back to times when people actually believed in magic and so much more!

One fun item on display is the original synopsis that Rowling sent to all of those publishers back in 1995. The placard under the display explains that “the pitch was circulated to prospective publishers alongside the first few chapters of the book.” While only the first page of the synopsis is on display, you can immediately tell that this was going to be something special as you’re introduced to Harry, the Dursley’s, Hagrid, Ron, Hermione, and Hogwarts. 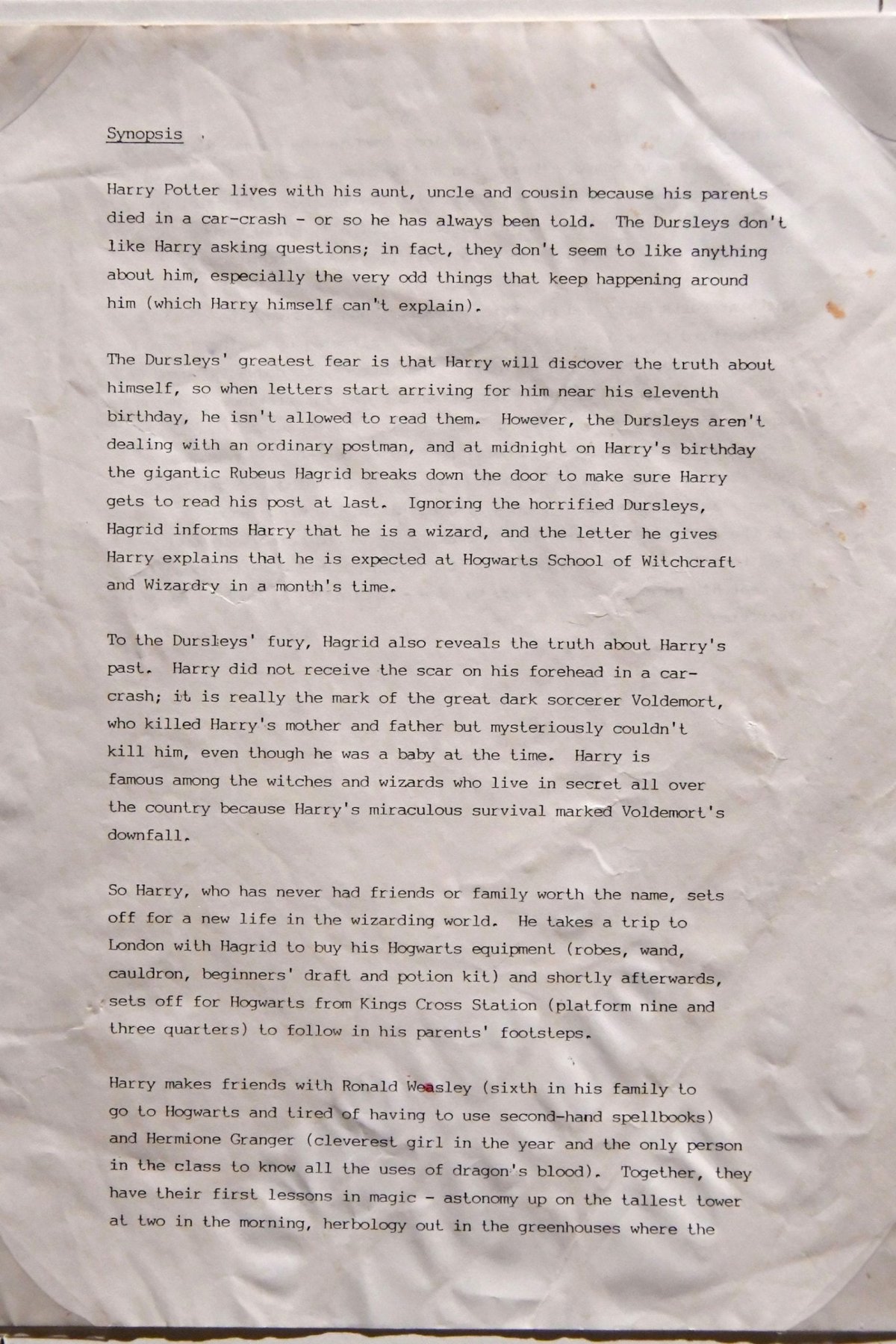 Harry Potter lives with his aunt, uncle and cousin because his parents died in a car-crash — or so he has been told. The Dursleys don’t like Harry asking questions; in fact, they don’t seem to like anything about him, especially the very odd things that keep happening around him (which Harry himself can’t explain).

The Dursleys’ greatest fear is that Harry will discover the truth about himself, so when letters start arriving for him near his eleventh birthday, he isn’t allowed to read them. However, the Dursleys aren’t dealing with an ordinary postman, and at midnight on Harry’s birthday the gigantic Rubeus Hagrid breaks down the door to make sure Harry gets to read his post at last. Ignoring the horrified Dursleys, Hagrid informs Harry that he is a wizard, and the letter he gives Harry explains that he is expected at Hogwarts School of Witchcraft and Wizardry in a month’s time.

To the Dursleys’ fury, Hagrid also reveals the truth about Harry’s past. Harry did not receive the scar on his forehead in a car-crash; it is really the mark of the great dark sorcerer Voldemort, who killed Harry’s mother and father but mysteriously couldn’t kill him, even though he was a baby at the time. Harry is famous among the witches and wizards who live in secret all over the country because Harry’s miraculous survival marked Voldemort’s downfall.

So Harry, who has never had friends or family worth the name, sets off for a new life in the wizarding world. He takes a trip to London with Hagrid to buy his Hogwarts equipment (robes, wand, cauldron, beginners’ draft and potion kit) and shortly afterwards, sets off for Hogwarts from Kings Cross Station (platform nine and three quarters) to follow in his parents’ footsteps.

Harry makes friends with Ronald Weasley (sixth in his family to go to Hogwarts and tired of having to use second-hand spellbooks) and Hermione Granger (cleverest girl in the year and the only person in the class to know all the uses of dragon’s blood). Together, they have their first lessons in magic — astronomy up on the tallest tower at two in the morning, herbology out in the greenhouses where the

It must have been hard trying to condense such a powerful and magical story and world into just a couple short pages, but I’d say Rowling was certainly off to a good start! Just imagine how some of those publishing houses that turned down this pitch must have felt when Harry & the gang completely changed the literary world and the lives of millions of readers young and old.