It was a day like any other until – until I picked up my mail. There was a random box that upon opening revealed a pair of giant bright orange fuzzy dice and a note from ‘Anonymous’ which read “Sliding into the Game Awards on 12/6”…. What could this mean? Why did I receive this? And what do a pair of crazy orange mismatched dice have to… wait a second. Orange… Crazy… Why am I getting déjà vu?

You see, earlier this year in April, I remember reading reports about how some video game writers received purple dragon eggs in the mail by someone named Falcon McBob. A few days later, BOOM! Spyro: The Reiginted Trilogy was announced! And as is usually the case, Spyro and Crash are always linked. Both got Remasters and now I’m getting a package that is reminiscent of that former promotional campaign. A package that is bright orange, furry and looks like the dice you hang in a rear-view mirror. Is this hinting at the possibility of Crash Team Racing getting a HD Remaster as well?

The note mentions the ‘Game Awards on 12/6’ so it looks like we’ll get confirmation pretty soon! Though another interesting feature is that the dice aren’t the same. One dice is the normal set while the other only has the 6 on it. Is this purposefully off because it’s Crash and he’s kind of ‘off’. OR does this hide an even more secretive message? If you add up the sides of a full dice (6,5,4,3,2,1) you get 21. Which would make these dice read at 6/21. Does this mean the game is being announced 12/6 (December 6th) and released 6/21 (June 21st)?

Either way, December 6th will be the day of truth. For those who don’t know, Crash Team Racing is another incredibly loved PS1 game. In fact, some even call it the Play Station equivalent of Mario Kart. How this will work with split screen and the now advanced Internet play, who knows! Let’s get a confirmation first before we ponder the game’s mechanics/ look. But if this is true… OH BOY! Pull up a couch and let’s race like we’ve never raced before! 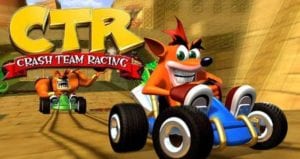