Geeklings, a very Happy New Comic Book Day to you all! It’s Wednesday and the week has hit that glorious halfway mark, and we celebrate it through the purchasing of glorious comic books. Is there a better way to celebrate? I’m all ears because the truth of the matter is you can take all your suggestions and add comics to make them even better. This is a fact. Wednesday is for the comics and we say thank you big big.

You know, I spend a large majority of my time here talking to you about what comics to read and what comics I’m reading that I don’t spend enough time asking you guys what you’re reading. Yes, I ask at the end of the column, sort of, but I want to take a minute to see what books have you guys super excited. It doesn’t even have to be a current title, you can be reading an older series or a whole bunch of back issues, but don’t be stingy. Share those books. Send me what you’re reading on Twitter (@iamgeek32) and next week I’ll put in a little readers corner where you guys can make suggestions for books that have you geeking out. I’m constantly on the lookout for new books so I’m all ears…eyes?

While I wait for your suggestions why don’t we start discussing some of this week’s books? Sounds like a good idea, doesn’t it? This is the Pull List after all… 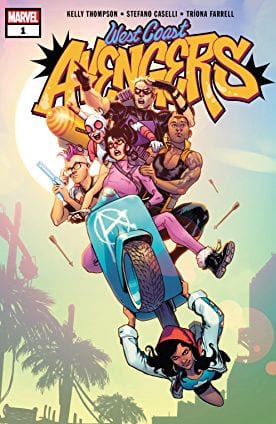 1. West Coast Avengers #1– Color me a tad bit excited for this book (that’s a phrase that still gets used, right?). Kelly Thompson has quietly been one of Marvel’s best writers (see her too short Hawkeye run and the first issue of the new Jessica Jones series) and she has put together quite the team for this new Avengers title. Now I know that Jason Aaron’s Avengers was supposed to be the only Avengers book, but with a cast like this, how could you say no to this book? We’ve got both Hawkeyes (Clint and Kate), America Chavez, Kid Omega, and Gwenpool among others. It’s such a wacky grouping of characters that I can’t help but feel that hilarity ensues and Thompson’s sharp dialogue is sure to excel with this cast. Plus, we need more comics with the two Hawkeyes in them. 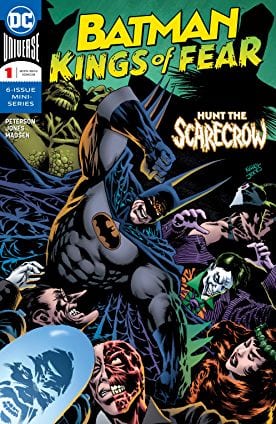 2. Batman: Kings of Fear #1– Do we really need another Batman book on the shelves? When it’s written by Scott Peterson and illustrated by the Kelley Jones, you bet your sweet bippy we do! The premise here is simple, Batman is filled with doubt wondering if he’s having the impact on Gotham that he desired when he set out. Enter the Scarecrow to feed on those fears and insecurities by starting a riot in Arkham, something that I see as the scariest possible scenario. I mean, Arkham riots?! Nah I’m good on that. So good. I’m really hoping this mini-series (only six issues) plays on the horror dynamic of Scarecrow and dives deep into Batman’s insecurities because a Batman who thinks he’s failing… that’s terrifying. 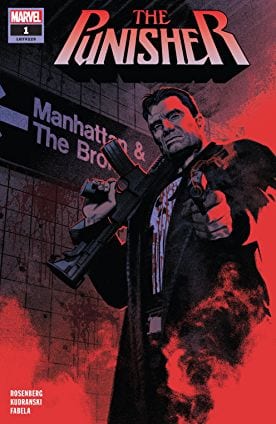 3. The Punisher #1- Matthew Rosenberg is another one of Marvel’s shining stars with books like Secret Warriors, Rocket Raccoon, and Tales of Suspense featuring Hawkeye and the Winter Soldier being some of my favorite Marvel books as of late. So it makes sense with Frank Castle out of the War Machine suit that Rosenberg is allowed to continue the adventures of the Punisher with a new series. I fully expect this series to be gritty and savage like the Punisher should be. Rumor has it that ole Frank gets his hands dirty with a big Marvel bad too. Rosenberg is a talent on the rise, and you should attach yourselves to any/all of his books. Do you need any other reasons to read this? 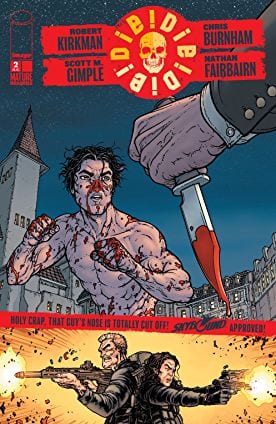 4. Die! Die! Die! #2– Remember when Robert Kirkman just dropped this book out of nowhere? Well, the Pull List remembers and totally appreciated the move. It’s hard to surprise fans in the comic book industry with spoilers to books often leaking ahead of their release, and Die! Die! Die! came as a refreshing surprise. As for the book itself? Well, it was a fun read filled with mega violence and mayhem, kind of everything you expect from a book with this title. With issue two I’d like to see it slowed down a tad bit, not a lot, just so we can start to get a better hold of these characters. After that, I say put your foot to the floor and see what kind of destruction and craziness this ride will bring us. 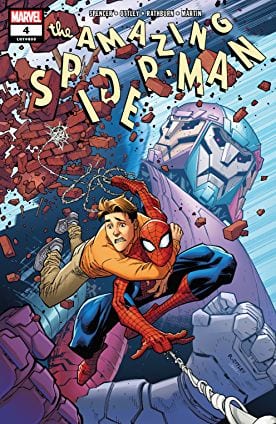 5. Amazing Spider-Man #4– I have been loving Nick Spencer’s run thus far, and for a minute last issue I got worried that we had another clone problem on our hands, but instead Spencer is doing something unique. By splitting Peter Parker into two people, regular Pete and Spider-Man, he has created an interesting dynamic between the two. The conversation Peter Parker has with himself (the Spider-Man half) was such an existential/introspective look into Spider-Man that might be one of my favorite things in a Spider-Man comic in quite some time. I definitely walked away with a deeper appreciation for my childhood hero. I’m curious to see where this first story arc leads and if Peter and Spidey can be reunited before you run into a Calvin and Hobbes type clone problem. With that being said though, this is the most fun I’ve had reading Amazing Spider-Man in quite some time. 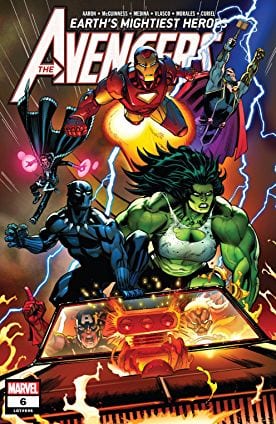 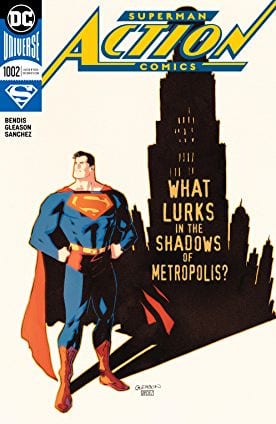 There you have it Geeklings, all the best books to get your grubby little mitts on. As always, if you feel like I’ve left anything off this week’s Pull List sound off in the comments. If you’re looking to talk more comics with yours truly you can find me on the Twitter @iamgeek32. Don’t forget to send me your what you’re reading now lists and I’ll be sure to post them here next week in our first ever readers corner. In the meantime, happy reading and many huzzahs! See you all next week.