Geekings, a very Happy New Comic Book Day to you all! And here I was thinking that last week’s New Comic Book Day was epic and along comes this week’s Pull List and suddenly I’m overwhelmed. We’re talking two massive comic book weeks in a row, both of which are playing heavily on my emotions. I’m not sure if I’m strong enough for this Geeklings.

While last week focused more on massive storytelling, looking at Last Knight on Earth and Doomsday Clock especially, this week kind of changes the focus a bit. We get the end of an era in a long-running comic that was bound to happen but still emotionally impactful. Elsewhere we get some pretty heavy answers to the deconstruction of one of our favorite heroes. And on top of all that, the DC Universe is turning into some sort of zombie-like creature. Yeah, I’d say this is one hell of a New Comic Book Day.

Why don’t we get things started? The quicker you read this the quicker you can read some comics and that’s what Wednesday is all about. 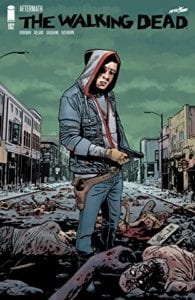 The Walking Dead #192- There are certain issues of The Walking Dead that you remember forever. Just about everything in the first issue, Rick losing his hand, the assault on the prison, Rick pulling his gun on Alexandria, the introduction of Negan and the loss of Glenn, and when all is said and done issue #192 will join that list of memorable moments. I’m not going to get into spoilers, they’re all over the internet anyway so please be careful, but I will say that what happens within these pages changes The Walking Dead forever going forward. Robert Kirkman has not been scared to tell the story that he set out to tell and the television series hasn’t changed that. The events here shouldn’t be a surprise considering the universe these characters live in and how Kirkman himself promised us that something like this would happen at some point. That doesn’t negate the pain though. This is a mega issue and will change the trajectory of this series going forward. I’m curious to see where things go now and how the events of issue #192 ripple throughout this universe. Bring your tissues… you’re going to need them. 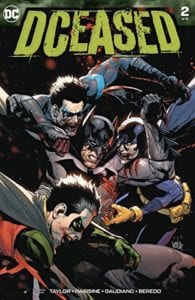 DCeased #2- Tom Taylor has created something with DCeased that is so off the wall, so bananas, that you can’t help but be sucked right in. We know from his work on Injustice that Taylor is unafraid to abuse the characters within the DC Universe and DCeased follows that trend and then some. I don’t want to say that this is exactly a zombie story because it’s more than that. It’s a social commentary on the use of social media, hysteria, and heroes in general. It’s easy to think of this series as just an Elseworlds horror story, but Taylor has set out to do something special here. Full of surprises, scares, craziness, and cliffhangers that will have you wishing it was next month already. 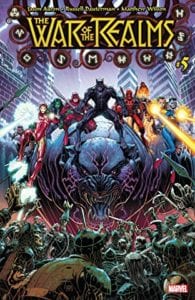 The War of The Realms #5- Can you believe there’s only one issue of this series left? Crazy. This event has just flown by in a gust of epicness and has been the first event comic I’ve enjoyed from start to finish in a long time. Jason Aaron has been building this story for years and you can feel his run on Thor coming to a close. Before it does though there’s still a bunch to be done like ridding the earth of Malekith and his evil forces. This penultimate issue sets the tone for a grand stage battle filled with hammers, axes, and all the thunder you could possibly imagine. This war won’t end quietly and we wouldn’t have it any other way. Oh, and that last page?! Yeah, the hype levels are real. 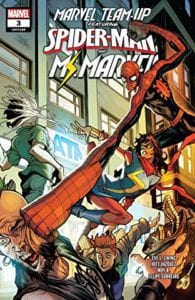 Marvel Team-Up #3- This is a really easy sell, at least for me. Spider-Man and Ms. Marvel. Working together. Battling the Jackal. Awesomeness ensues. The last time these two teamed up it pulled on my heartstrings and now with the passage of time, and Ms. Marvel establishing herself as one of Marvel’s top characters, I fully expect this issue to bring it. Two of my favorite heroes together in one book. As I said, this sells itself. 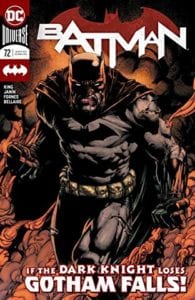 Batman #72- Man, if you’ve been reading Tom King’s full Batman run then this is the issue you’ve been waiting for. A lot has happened within the last week when concerning this title. King will be moving on from the main Batman book after issue eighty-five and finishing his story with a twelve issue Batman/Catwoman series. I for one am not happy to see him pulled from the title but am ecstatic that he’ll get to finish what he started. This Batman run has been an all-timer and a personal favorite of mine. Everything matters. Everything! And if you don’t believe that then read issue #72 and get back to me. The curtain is pulled back as all the pieces start to come together. What King has done here is unheard of and special, and it shouldn’t be critiqued arc by arc because each arc is a piece of a bigger puzzle. This is a story that needs to be judged as a whole and I’m happy to see that DC is allowing King to do that. This story deserves the ending that was intended. This is an incredible issue filled with masterful storytelling and gorgeous layouts from artists Jorge Fornes and Mikel Janin. If you’ve made it this far then prepare to be rewarded… and heartbroken. 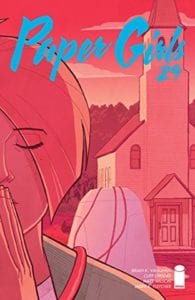 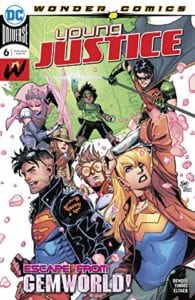 There you have it Geeklings, all the best books to get your mitts on this week. As always, if you feel like I’ve left anything off this week’s Pull List be sure to sound off in the comments. If you’d like to talk more comics with yours truly then you can find me over on Twitter @iamgeek32. We’ve had two pretty intense New Comic Book Days in a row, here’s hoping that next week allows us to catch our breath and emotions a bit… who am I kidding. Keep it coming! Bring on all the intensity! I’ll see everyone back here next week. In the meantime, happy reading and many huzzahs!

Home » Fandom » Pull List- End of an Era in the Walking Dead, DC Zombies, & Penultimate War of The Realms