Geeklings, a very Happy New Comic Book Day to you all! And what a fine New Comic Book Day it is. I’m still riding the high from the surprise El Camino trailer yesterday and that has made for a most excellent transition into the excitement for new comics. Granted, none of today’s comics deal with a chemistry teacher who gets lung cancer and becomes a crystal meth cook, but that’s what my rewatch is for. The trailer just heightens the joy of new comics in the sense that it’s like finding a bonus gift under the tree. I’m not sure if any of this makes sense… let’s just say I’m a little hyped at the moment.

What better way to unleash that excitement then coming here for a brand new edition of the Pull List where I get to talk comics with all my favorite peeps. That’s you in case you were wondering. As a bonus, today happens to be National Comic Book Day so it really feels like the gods are in our favor this week. Comics for all. Your job on this National Comic Book Day should be to find that non-comic book reader in your life and give them a book to read. As a gift. Whether you send it to them digitally, hand them a single issue or a trade, but your actions could open the door to a new fan and here at the Pull List we always say the more the merrier.

My gift to you on this National Comic Book Day is a list of new comics for you to be reading right now! There’s a bunch of good ones so strap yourself in and get ready to read. Starting with… 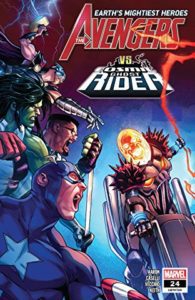 Avengers #24- Jason Aaron’s Avengers title has been low key awesome. Personally, I know I don’t give it enough spotlight here but it doesn’t mean I don’t see what’s happening on these pages. It took some time but this title has really picked up some steam with the Vampire War, the resurrected Coulson working with Mephisto, and now the battle of the Ghost Riders. Our team’s Ghost Rider is currently in hell racing Johnny Blaze for the crown of King Ghost Rider while the rest of our crew has to deal with… the Cosmic Ghost Rider! Yeah, I’m pretty stoked about this too. Donny Cates has created such a kickass character here, instant classic, and knowing that Aaron and he work so closely together I’m excited to see what Aaron does with the character. Plus, getting to see him interact with Captain America, Iron Man, T’Challa, and She-Hulk should be an absolute blast. Don’t sleep on this book. Things are… heating up. Get it? Cause Ghost Riders? Nailed it. 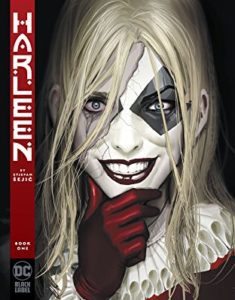 Harleen #1- Who wants a new Harley Quinn origin story?! Well, you’re getting it whether you want it or not on the DC Black Label printing line. Written and drawn by Stjepan Sejic, Harleen looks to sort of reimagine the tale of Doctor Harleen Quinzel as she tries to save Gotham from its madness. Of course, we know how this turns out and while this is a new origin story the results will be the same. Doctor Quinzel will eventually become Harley Quiin through her love affair with the Joker. I’m curious to see what Sejic has in store with this story but I would love if we didn’t romanticize the Joker here. I thought Heroes in Crisis did an excellent job of highlighting how toxic this relationship is and I’d hate to see a book come out and celebrate it. 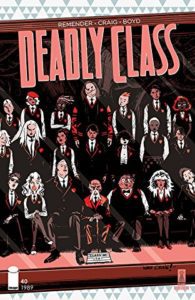 Deadly Class #40- Look whose baaaaaaaaaaack! I have missed Deadly Class. It’s been a few months, and one wrongly canceled kickass television show, since our last issue of Deadly Class and we’re finally getting the band back together. Both Maria and Marcus have returned to King’s Dominion in the hopes of battling the corruption head-on. Marcus seemingly is teaming up with Willie’s sister in an effort to build his army while Maria heads to a church to find… Saya! She’s back from captivity and is meeting with Maria for the first time since Maria went missing. It’s a massive moment that concluded issue #39 with a hug that tugged on all the heartstrings. What does this mean going forward? You would have to believe that Marcus and crew are going to go to war with King’s Dominion and having Saya as their ace in the hole is pretty big. Things to look out for though, Helmut looks like he could be about to do something stupid and it’s a callback to Marcus taking on F-Face. And we all know how that worked out. Super happy to have this book back in my hands. 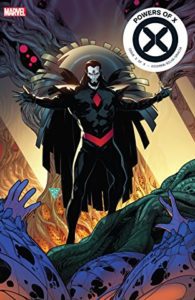 Powers of X #5- There are only two issues of this event series left before we jump into the main X-Men title and I already miss its weekly presence. But I’m not going to panic. There are still two issues left to be read and one of them (Powers of X #6) is highlighted in red on the reading chart which means it’s a major/can’t miss book. Before we start looking toward these final two books there is plenty to digest with Powers of X #5. Let’s start with the mutant council and the clear omission of names from it. I’m very curious to see who Charles, Magneto, and Emma Frost have in mind for seats at the table and the impact these choices have on the future X-Men books. Last week’s House of X #5 was a major issue and we kind of pump the brakes here a little bit. While this issue of Powers of X may not be overly flashy, it is cool to learn more about the downloading process, I don’t think we can ignore its importance for the franchise moving forward. With two issues left there is still a great deal to be tackled and this council adds a new wrinkle. Although, I can’t be the only one wondering where Moria is in this timeline. She has been absent and it’s raising red flags for me. 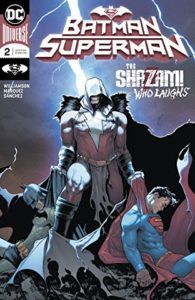 Batman/Superman #2– The Batman Who Laughs is having quite the time in our neck of the multiverse. It probably helps that he’s recruiting heroes from other multiverses and creating an army of heroes Who Laugh. Like Shazam! for instance. This has a very Apocalypse and the Four Horsemen vibe that I kind of dig. The Batman Who Laughs is trying to tear down our world and what better way of doing that then trying to take two of the big three off the board. How will Batman and Superman react to the Shazam Who Laughs? Will they be able to stop him or is this just a small part of the Batman Who Laughs master plan? DC’s Year of the Villian continues here in Batman/Superman. 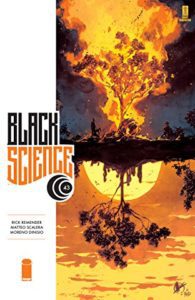 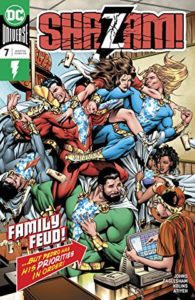 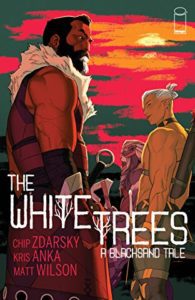 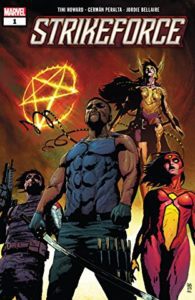 There you have it Geeklings, all the best books to get your mitts on this week. As always, if you feel like I’ve left anything off this week’s edition of the Pull List be sure to sound off in the comments. If you’d like to talk more comics with yours truly then you can find me over on Twitter @iamgeek32. Drop me a line. I’m in the midst of a massive Breaking Bad watch too so there’s plenty to discuss. In the meantime, tomorrow is my birthday and I’ve got some comics to read before I celebrate. I’ll see you all here next week. Until then, happy reading and many huzzahs!