Geeklings, a very Happy New Comic Book Day to you all! How is everyone out there on this lovely Wednesday? The sun is out, the comics are fresh, and we’re here with a brand new edition of the Pull List. Seriously, what could be better? I’m not a doctor but I’m pretty sure comic books are all we need for what ails us. Right?  Again, I’m not a doctor but I stand by this…

Not even remotely a doctor.

Putting aside my medical advice, let’s turn our focus to all the kickass comics that were released today. One of life’s great joys is waking up and knowing that you have a full pull list to look forward to.  And this week is bringing some serious heat. Let’s get things going, starting with… 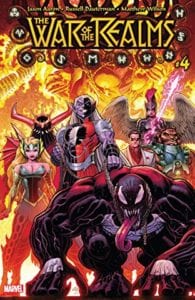 War of the Realms #4- How can there only be two issues of this series left? This is one of those event comics where I’d be more than happy to see another issue or three tagged on. That’s how fantastic War of the Realms has been thus far.  In this latest issue, Jason Aaron continues to crank the volume up further and further as all our heroes are close to converging in on one thing. That final battle with Malekith, who up until this point, has been running the show. For a Thor-centric event, the perspective has been mostly on the heroes of earth as they’ve battled with Malekith’s forces while Thor was off destroying anything that resembled a Frost Giant. Now with the tide turning it might be time for Sparkles to get involved. A lot of tremendous moments here concerning Odin, the All-Mother, and other characters that have shined all throughout Aaron’s run. It’s time to bring the thunder to these dark elves! Pun definitely intended. 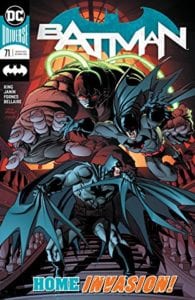 Batman #71– Batman may have survived the “Knightmares” arc but his nightmares are far from over (is it me or am I killing it with my puns today?!). Last issue saw Batman rip through all of Arkham like a man possessed leaving a message for Bane. “You know where to find me”, and he certainly does. The best part of Bane’s work is how Batman doesn’t believe he’s broken or lost, but issue seventy-one certainly shows the cracks. This issue has one of my favorite panels of the week, with Batman and the Bat-Family atop the roofs of Gotham, and is pushing things forward a bit more. If you had any question of who was in control before this issue then I think you’ll leave this one with a bit more clarity. King has been on record saying that issue seventy-five is going to be a game-changer, so it’s probably best that we start mentally prepping ourselves now. 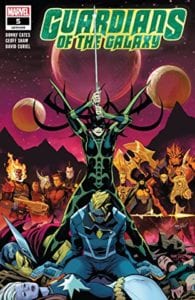 Guardians of the Galaxy #5– I don’t understand why we’re not talking about this book more. Donny Cates’s Guardians run has been an absolute blast that uses previous runs as a tapestry for something entirely fresh while bringing about some real emotional complexities to the series. I love how it feels like there’s a Donny Cates pocket of the Marvel Universe developing. The last issues ended with Peter taking a blast to the chest for Gamora and issue five picks right up from there. Is Quill dead? What happened to Gamora? What’s Thanos’s master plan? All those questions have answers here and prepare for some face melting. Only one issue left in this arc and then maybe we can start to figure out what the hell happened to Rocket. 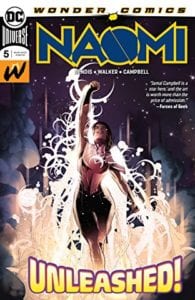 Naomi #5- This is the one we’ve been waiting for. One of the things I was most excited about Bendis jumping ship to DC was his ability to create some new characters, and with Naomi he has not disappointed. It’s hard to believe that she’s only been around for five issues but Bendis has taken such great care to weave her into the larger DC Universe that it seems like she’s been here a lot longer. For those of us who have been looking for answers, and this whole book has been built on mystery so that should be all of us, this is the book for you. Everything we’re looking for is here, and it’s exciting to see where Naomi goes from this point forward. Bendis has another fantastic original character on his hands and she’s just getting started. 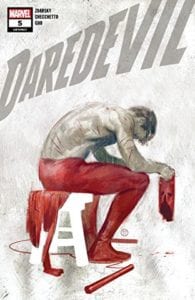 Daredevil #5– Chip Zdarsky’s first Daredevil arc is coming to a close, and it has been quite the first five issues. On the run and accused of murder, a superhero no-no especially when you’re Daredevil, Matt Murdock has been through the wringer. Zdarsky has been on a tear lately with his runs on Invaders, Spider-Man Life Story (also has a new issue out today), and Daredevil which he has written with such vulnerability and grittiness that it’s hard to ignore. Five issues in and I already can’t wait for what comes next. 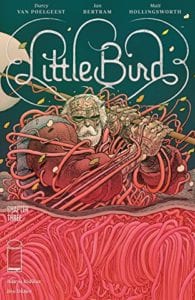 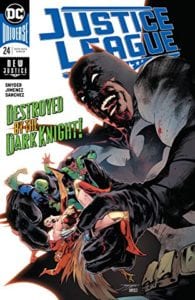 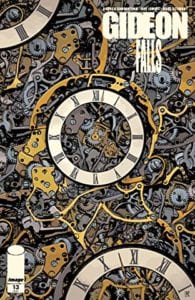 There you have it Geeklings, all the best books to get your mitts on this week. As always, if you feel like I’ve left anything off this week’s Pull List be sure to sound off in the comments. If you’d like to further our comic conversation feel free to throw me a line over on Twitter @iamgeek32. All comic questions or conversations are welcomed. In the meantime, I’m going to start mentally prepping myself for the Game of Thrones finale now. Winter has come my friends. See you all next week, happy reading and many huzzahs!