Geeklings, a very Happy New Comic Book Day to you all! As far as New Comic Book Days go today’s is a bit on the quiet side. There just aren’t a ton of books out today. Not saying there aren’t any quality books out, because there are, it’s just a low number of books to choose from. Must be gearing up for next week’s huge release week. Especially if you’re a fan of DC Comics. Trust me, you’re not going to want to miss next week’s Pull List. We’re talking crazy town banana pants levels of awesome.

Not bad for a teaser, right?

All teaser’s aside though, let’s look ahead to this week because there are some books that’ll sure to be tickling your eyeholes. Starting with… 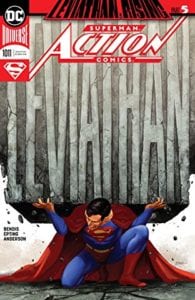 Action Comics #1011- First, let’s start off with this cover. I absolutely love what Steve Epting has done here. It has alllllll these old school, classic vibes to it. Brian Michael Bendis is bringing his “Leviathan Rising” arc to a close with issue #1011 and things aren’t looking great for Supes. With DC’s Year of the Villain upon us, and knowing that Bendis has massive plans for Leviathan, don’t go into this issue expecting happiness. The arc is named “Leviathan Rising” for a reason and I fully expect further establishment of dominance here. How will Superman, and Lois for that matter, respond to these events? I’m not sure but I do know that this is the blueprint for one hell of a summer for the Man of Steel. 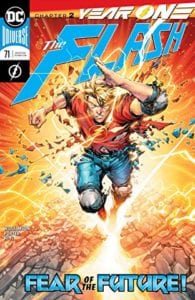 Flash #71– “The Flash Year One” continues! I really enjoyed the first issue of this series and while origin stories are a more than a little played out, Joshua Williamson managed to make this seem fresh and important. Come on, Barry Allen blowing through all those sneakers was a delight. Issue #71 will continue Barry’s quest to control his new found powers as he becomes one step closer to becoming The Flash. For those of you who are worried that this is just a flashback story fear not as there are heavy ramifications to the series run to be found here. This is going to be worth your time. 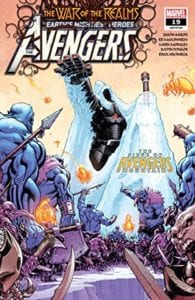 Avengers #19- War of the Realms is branching out just like any big comic event is wont to do. What makes this tie-in so good is that it’s written by Jason Aaron which means this issue is basically War of the Realms 2.5. When last we left the Avengers their new headquarters, the giant Celestial body in a frozen mountain, was under siege by Malekith’s forces. The question becomes will they be able to fight their way out of it or will Coulson’s group be the ones to steal the glory? Throw in the fact that Coulson is working with Mephisto, who has been everywhere lately (see Champions), and we’ve got all types of problems for earth’s mightiest heroes. 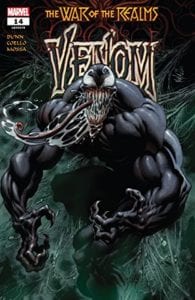 Venom #14– Speaking of War of the Realms tie-ins, may I present to you the latest issue of Venom? Donny Cates is taking the next three issues off as he preps for this summer’s Absolute Carnage. Please don’t worry he’s coming back but until he does Cullen Bunn will be holding down the fort as Venom finds himself in a bit of a pickle. Malekith was having none of our favorite symbiote and now is controlling Venom as some sort of demonic pet. That’s not good. Like at all. Will Venom be able to escape Malekith’s grasp or has he become the dark elf’s secret weapon? 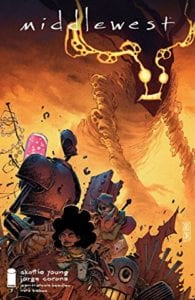 Middlewest #7- Skottie Young writing an epic fantasy tale with Jorge Corona on art. The first collection is also released today. If there ever was a time to jump on this fantastic book it’s now! Do it! Read it! Love it. Tell your friends. Have them tell their friends. So on and so forth. 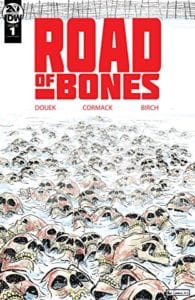 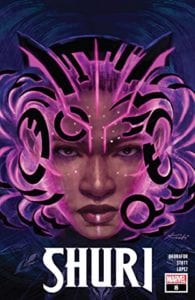 There you have it Geeklings, all the best books to get your mitts on this week. As always, if you feel like I’ve left anything off this week’s Pull List be sure to sound off in the comments. If you’d like to talk more comics with yours truly then you can find me over on Twitter @iamgeek32. In the meantime, start mentally prepping yourself for next week’s Pull List cause it’s bonkers. Happy reading and many huzzahs my friends!