Geeklings, a very Happy New Comic Book Day to you all! It’s Wednesday and the comics are falling off the shelves and into our pull lists. Seriously, this is the best day of the week… that and anytime I get to eat tacos. I try not to be regulated to Taco Tuesday only. I’m going to eat a taco any time I damn well please. Take that food schedule! Of course, it’s not a good idea to eat tacos around comics. You’re just asking for some stained pages and ruined books, and is a taco worth that? Don’t get me wrong, I love tacos more than most things in life but I think it’s okay to keep my love for tacos and comics separate. For the greater good, of course.

Fun fact, I’m writing this week’s Pull List a day early because #sociallifegotintheway which probably explains why I went on the taco tangent. Maybe it doesn’t though, I spend a good portion of every day with tacos on the mind. Truth be told, I spend a bigger portion of every day with comics on the mind and what better way to get those thoughts out then with my favorite people in the world. Stop looking so puzzled, I’m talking about you. Yes, you! What a time to be alive.

All pleasantries aside, I think it’s time that we start talking about some comics. The last couple of weeks have been filled with some fantastic books and this week doesn’t look to disappoint. Let’s start with a six-issue event series, shall we? Of course, we shall! 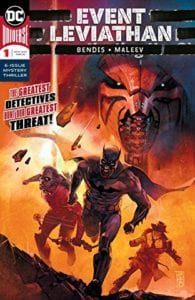 Event Leviathan #1– Brian Michael Bendis is no stranger to event comics but that was back when he was at Marvel. Since jumping ship to DC, Bendis has focused more on his Jinxworld and Superman titles, but the time has come for him to dip his toe into the larger DC Universe. What better way to start his first DC event series then bringing his old Daredevil pal, Alex Maleev, to kill it on art? As for the event itself, Event Leviathan has been something Bendis has been building toward for some time in his Superman run, and things are finally coming to a head. Pegged as a six-issue mystery series, Leviathan will see Bendis get to play in the DC sandbox a bit more. With characters like Batman, Green Arrow, and Plastic Man all set to have large roles within the series, expect Bendis to bring some pretty large set pieces into play. None larger than the mystery surrounding Leviathan him/herself. Really looking forward to watching this unfold and how it plays into DC’s Year of the Villain and the broader DC Universe. I fully expect Bendis to make a large splash here with his first DC event, and it all starts here. 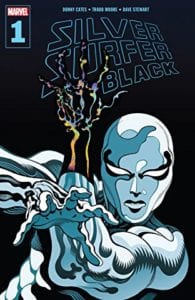 Silver Surfer Black #1- I’ve been singing the praises of Donny Cates’s Guardians of the Galaxy run for quite some time now as it continues to be one of my favorite monthly reads. With all the attention on Cate’s being directed toward Venom and Carnage, it’s easy to forget that he’s doing some pretty big things with the Marvel cosmos, and if Annual #1 is any indication, I think we’re building toward something massive. If that’s the case, then I fully expect this five issue mini-series to be a large part of whatever is happening in the stars. When we last saw the Surfer he was being sucked into a black hole, no big deal, with a bunch of others who gathered for Thanos’s wake. The Surfer was able to save the majority of others sucked in but was unable to break free himself. This series will deal with that and if Tradd Moore’s art is telling us anything it’s that this is going to be one trippy adventure. Cates has been killing all his books and I can’t wait to see what he cooks up here and how it plays into his plans for the Marvel cosmos. Big things ahead! 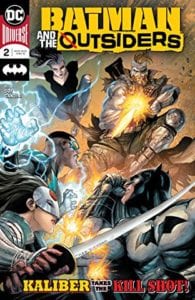 Batman and the Outsiders #2– Don’t be fooled by the title of this book. Yes, Batman is involved but this is very much Black Lightning’s team. Sure, they’re kind of doing Batman’s dirty work like some kind of tamed version of the Suicide Squad, but Black Lightning is certainly in charge of this team. For now. It looks like Katana is already questioning his leadership, and this is only their first mission. I’m sure that won’t be a problem, he said sarcastically. Bryan Edward Hill has a bunch of big personalities in play with this team and things are just getting started. With a larger mystery looming and the strength of Hill’s writing, Batman and the Outsiders will be something to look forward to month after month. 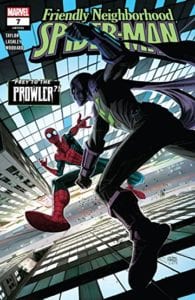 Friendly Neighborhood Spider-Man #7- How do you follow up one of the greatest single issues of any Spider-Man comic? With a little bit of action to distract from all the emotions still spilling over from last issue. I can’t even talk about that book without choking up. Seriously. It’s a good thing that Aunt May is trying to distract herself from her current medical issues (god, so many feels in this series) and has re-opened the F.E.A.S.T. Center to help the homeless. You’ll remember F.E.A.S.T. from the PS4 Spider-Man game and all things Mr. Negative, and Aunt May wants to change that perception while doing a little good. The Prowler might have some issues with that as he throws a wrench into Aunt May’s plans. Looks like someone needs a stern talking to. Tom Taylor has been on a hot streak lately and I fully expect that to continue here as he writes an awesome Spider-Man. Don’t sleep on this series. 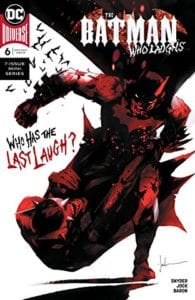 The Batman Who Laughs #6- This book has been bonkers. Straight up bonkers. It’s only right that a book this insane would get a two-part finale, and that finale starts here with issue six. This is the confrontation we’ve been waiting for. Our Batman looking the Batman Who Laughs directly in the spikes. Questions of mortality hanging in the balance. The stakes are high. Can Bruce Wayne overcome this monster?! Will he be the same afterward? Bring it! 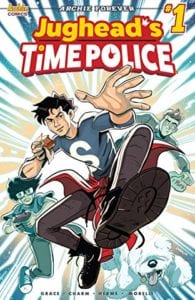 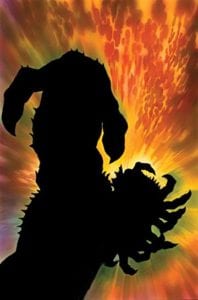 There you have it Geeklings, all the best books to get your mitts on this week. As always, if you feel like anything was left off this week’s Pull List be sure to sound off in the comments. If you’d like to talk more comics with yours truly then you can find me over on Twitter @iamgeek32 where the comic talk is endless. I’ll see all you lovely people back next week, in the meantime, happy reading and many huzzahs!