How about the Pull List. Because without New Comic Book Day there would be no Pull List and that just sounds like a sad world to live in. We’d have to find other ways to talk… how do you guys feel about tacos? We could do a weekly column about them… I mean, if comics didn’t exist that is.

Alright, before I go on yet another taco rant what do you guys say we start breaking down this week’s comics? There are some real kickass books that should have you running to your local comic book shop immediately. So many kickass books in fact that my wallet refuses to go into my pocket as it recovers from the shock of another New Comic Book Day with high costs. Such is the life of a comic reader.

Let’s start things off in epic fashion with… 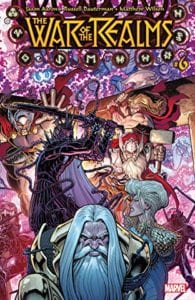 War of the Realms #6- Here it is, the final issue of the long-awaited War of the Realms and I can honestly say that this issue does not disappoint. Not even a little bit. Hell, the entire event has been tremendous. Jason Aaron has been building to this moment for so long that it was fantastic to see an event live up to the actual hype. It might have restored my hope in Marvel event comics a little bit. Bring on Absolute Carnage! All this is beside the point, issue #6 delivers on such momentous levels that it’s staggering. If you’ve been reading Aaron’s Thor run since the start then this issue pays off in some awesome ways. If you’ve only been reading this event then this issue pays off in some awesome ways. It feels like the end of an era while opening the door to something new and just as exciting. What Aaron has done with Thor is unheard of, and while the run isn’t over yet, War of the Realms is a celebration in storytelling full of terrific moments for a number of characters. From start to finish this event has been a success and just a lot of fun. Can’t see where we go from here. 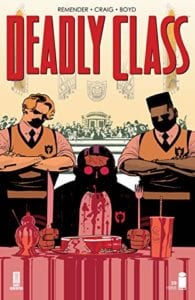 Deadly Class #39- If you’re like me then you’re pretty bummed that SyFy canceled Deadly Class and no other network picked it up. It’s a bummer of epic proportions. Here’s the thing though, the story that you fell in love with on TV is still ongoing in the source material. You don’t have to say goodbye to these characters at all as the comic takes an even deeper dive into what makes them so relatable and tragic. Issue #39 is the end of the latest arc, ugh now we wait until September, but it ends things with an issue filled with surprises, growth, and some truly emotional moments. Looking at you last page. Don’t be sad that Deadly Class is gone, be excited to experience the story as it was intended. Rick Remender and Wes Craig welcome you into the universe of King’s Dominion with open arms. No one loves these characters more than them and it shines with every word and every panel. All Rats welcome! 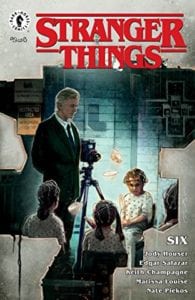 Stranger Things: Six #2- I am literally counting down the days until season three of Stranger Things. I’m talking Endgame levels of excited. If I wasn’t here writing about comics I would be writing about Jonathan and Nancy screwing things for Hawkins or maybe breaking down the latest trailer or wondering if someone needs to die this season (#shamelesswritingplugs). I’ve got Stranger Things on the mind so it’s a good thing that Dark Horse has the second issue of its prequel series out today. This series follows Six as she is recruited into the MK Ultra experiments along with a ton of other powered numbered kids. This series takes place during the late ‘70s and shows us just what Hawkins Lab was doing before the events of the television series. It’s been a lot of fun thus far and filled with some pretty interesting easter eggs. If you’re just chomping at the bit for the return of Hawkins then this is exactly what you need to hold you over for the next week. 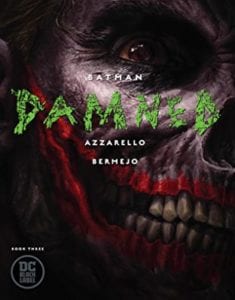 Batman Damned #3- You might have forgotten that this book was still being released, and I think that was by design. DC did not take kindly to the whole Little Bat social media blow up from issue one and really dialed back on the first Black Label series which is a bummer because, for the most part, this has been a pretty interesting comic. Brian Azzarello is no stranger to the darker sides of Gotham, is there even a light side, and that trend continued here in Damned. Issue 3 is the conclusion of this story and hopefully, it ends on a strong note without the shadow of Batman’s other sidekick hanging over a different type of Batman narrative. 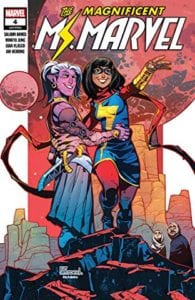 The Magnificent Ms. Marvel #4- I’ll be honest, when G. Willow Wilson left Ms. Marvel, I was concerned with the future of the character. To have someone other than Wilson writing a Ms. Marvel book seemed like sacrilege. I have to say though, that Saladin Ahmed has done an outstanding job picking up the reins of this book. The true gift to any writing change is making it feel like there was no writing change, and Ahmed and his team have done that here. Transitioning Ms. Marvel to an alien planet and giving her some new surroundings for a bit adds a nice change a pace but has also allowed the deep, character-driven stories that have made this series such a success. 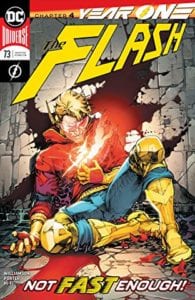 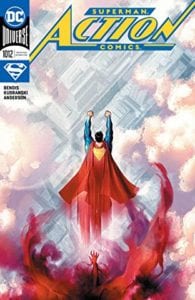 There you have it Geeklings, all the best books to get your mitts on this week. As always, if you feel like I left anything off o this week’s edition of the Pull List be sure to let me know in the comments. If you’d like to talk more comics with yours truly then you can find me over on Twitter @iamgeek32. Drop me a line and let’s talk some of your favorite books at the moment. In the meantime, I’ll be back next week as we head into the kickoff of summer and the return of Stranger Things. Happiest of happy days! I’ll see you all next week, happy reading and many huzzahs!