Geeklings, a very Happy New Comic Book Day to you all! Welcome to the official kickoff to summer! The Fourth of July is here and with it comes a new season of Stranger Things (eeeeeeeeeeee) and Spider-Man Far From Home (eeeeeeeeeee), and life is good for us geeks. Now throw in New Comic Book Day… what more could you possibly ask for?

You would think that with tomorrow being the Fourth of July that this New Comic Book Day would be a little light, but New Comic Book Day takes no days off and this one is especially full of big books and massive surprises. I mean, what else are you going to read while you’re sitting poolside or at the beach or just chillin’ inside in the dark with the A/C on?

I know you guys are anxious to start celebrating summer so let’s start breaking down some books so you can figure out what to buy from your local comic book shops for your holiday reading. And let’s start with the biggest book of the week… 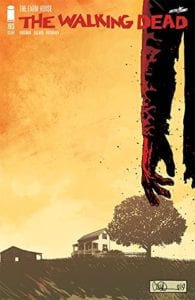 The Walking Dead #193- I’m sure that you’ve heard by now, but this latest issue of The Walking Dead is kind of a big deal as it is the end of the series. That’s right, after last issue’s shocking events (no spoilers here), Robert Kirkman brings one final shock… literally. While I’m saddened to see the series end, was curious to see how things played out after that big moment last issue, I’m always happy to see a creator end a series on their terms. This is the story Robert Kirkman set out to tell and for him, this is where it ends. For one hundred ninety-three issues we’ve followed Rick Grimes and his band of survivors try and navigate through the zombie apocalypse. We’ve fallen in love with these characters. We’ve watched them grow in real time. We’ve shared their pain. Their loss. Their passings. And in the end, we’re better for it. Where does this issue leave them? Well, that’s why you’re going to have to read this seventy plus page farewell. The Walking Dead changed the game when it came to creator-owned comics and this story was so much more than just zombies. Robert Kirkman gave us a gift with this universe and for that, we say thank you big-big. Here’s to riding off into the sunset on your own terms. 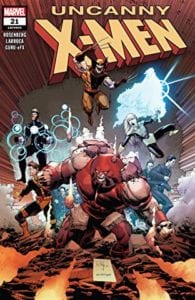 Uncanny X-Men #21- Speaking of endings, for those of you who have been following Marvel’s latest batch of X-Men books then this is the end of the road. No, they’re still going to be making X-Men stories but the whole franchise is about to go through a complete facelift. Jonathan Hickman starts his relaunch later this month and everyone’s favorite mutants are about to see more streamlined storytelling. Fewer books, a hopeful return to prominence, and the best possible X-Men stories are on the horizon. I for one am excited to see how Marvel handles the X-Men property going forward and what kind of craziness Hickman has in store for us. In the meantime, we should be celebrating Matthew Rosenberg’s run as he did a lot of work to bring some stability to the X-titles. Here’s hoping to great things ahead. 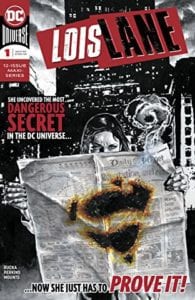 Lois Lane #1- The Superman family is about to see some expansion when it comes to solo titles. Later this month Jimmy Olsen will be getting his own series written by none other than Matt Fraction which I’m all types of excited about. If you’re having a tough time waiting for that book then let me turn your attention to the first issue of Lois Lane written by Greg Rucka (!!!). A story that sees Lois hitting the road investigating a threat to her husband, Superman. I fully expect a ton of intrigue, a building mystery, and tension with a series that sees Lois act on her own out of the shadow of Superman. Sure, the central mystery revolves around the Man of Steel but it will be great to see Rucka write Lane in her element. 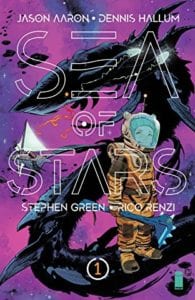 Sea of Stars #1- Did you guys say that you wanted a creator-owned series written by Jason Aaron? Of course, you did because who doesn’t want that?! With Dennis Hallum sharing the co-writing duties and some seriously breathtaking art from Stephen Green, Sea of Stars is a new sci-fi series from Image Comics and I can’t stress enough how gorgeous this book looks. As for the story, it’s a father and son tale involving a space trucker (which sounds like the most incredible job ever) as he hauls some cargo literally across the universe. Insert an attack from a giant alien creature, a space suit that’s failing, and the separation of father and son and you’ve got yourself one hell of a book written by one of the industry’s best. This book practically sells itself but I’m here to help give it a little nudge in your direction. That’s what I do. 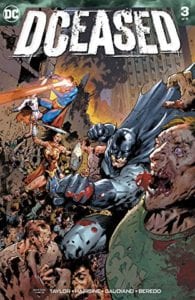 DCeased #3- What better way to ring in the Fourth than with a comic series that sees the anti-life equation rip through the DC Universe turning everyone into these rage beast zombies? Answer, there is no better way. Tom Taylor’s latest Elseworld story is really bringing the havoc and further proving that Taylor just doesn’t care about your feelings when it concerning your favorite DC heroes. I mean, good god man! DCeased is just a lot of twisted fun with some excellent social commentary and events that will scar you pretty deeply. Like… “I need a hug” levels of scarring. With Taylor at the helm, I wouldn’t want it any other way. 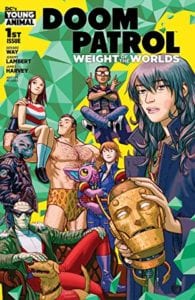 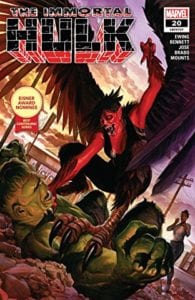 There you have it Geeklings, all the best books to get your mitts on this week. As always, if you feel like I’ve left anything off this week’s Pull List be sure to sound off in the comments. If you’d like to talk more comics with yours truly you can find me over on Twitter @iamgeek32. You’ll find me there all weekend reacting to Stranger Things and Far From Home. I hope everyone has a safe and happy Fourth of July. Eat tons of hotdogs, watch tons of Stranger Things, and read comics till your eyes hurt. I’ll see everyone next week. Happy reading and many huzzahs!